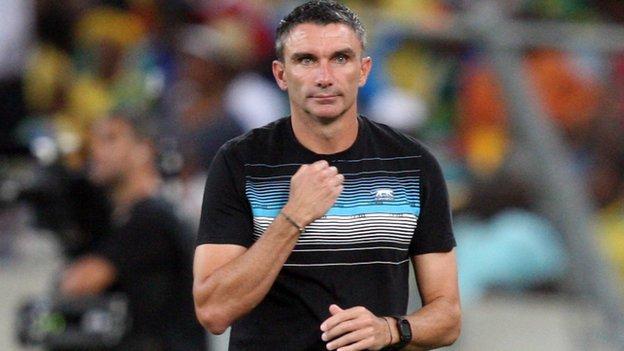 The Tunisians won last week's first leg 2-0 to put themselves in control of the tie and on the verge of winning the trophy for a third time.

But Mazembe are confident they can bounce back in front of their home fans in southeast of the country on Saturday.

Mazembe's wealthy president Moise Katumbi said the four-time Champions League winners have everything going for them in the reverse fixture.

I hope we will be able to do it at home

"We need to have faith, we lost a battle but not the war," Katumbi said in a statement on the club's website.

"We are going to play for the cup to stay in Congo.

"Two-nil is nothing. I believe in our team and in our fans. Personally, I like this kind of situation because it is in difficulty that we can achieve great things."

Mazembe's French coach Patrice Carteron (pictured) said his team will need to do something special to turn the tables on the Tunisians but was seeking inspiration from his country's comeback win against Ukraine in the World Cup play-offs.

"With the deficit from the first leg, we have to do something extraordinary to now reach our goal," admitted the former Rennes, Lyon and Saint-Etienne defender.

"France's feat against Ukraine? We will try to follow that example. I hope we will be able to do it at home."

Mazembe lacked the cutting edge in Tunis with Zambia striker Given Singuluma and Tanzania international Thomas Ulimwengu both failing to put away the few chances they created.

Tunisia forward Fakhreddine Ben Youssef was involved in both goals at the Rades Stadium near Tunis and his pace and trickery down the flanks will again be vital in the decider.

For Sfaxien's Dutch coach Ruud Krol, victory over Mazembe would be his first international success as coach.

In May, the former Orlando Pirates of South Africa handler led Sfaxien to their first league triumph in eight years.

It was an achievement that won him the chance to take the helm of the Tunisia team for the final World Cup play-off match against Cameroon.

The overall winners of the final will pocket $660,000 (nearly 500,000 euros) in prize money and take on Champions League winners Al Ahly of Egypt in the prestigious Confederation of African Football Super Cup next year.