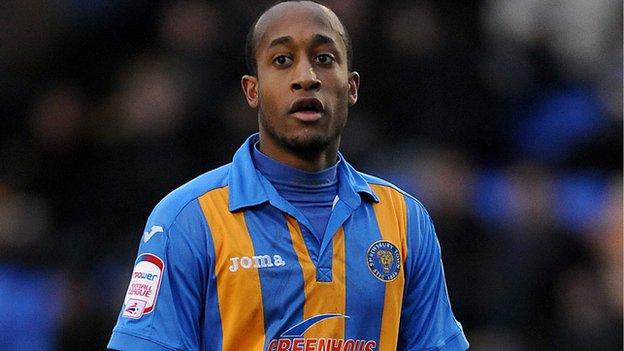 Shrewsbury Town have signed defender Cameron Gayle on loan from West Brom for a second time - a year on from his last move to the Greenhous Meadow.

The 21-year-old right-back has signed a contract which lasts until 5 January, making him available for a possible seven League One matches.

Shrewsbury have also made a similar loan swoop for another familiar face by bringing back Bolton striker Tom Eaves.

Eaves, also 21, scored 10 times in six games for Town back in the spring.

He has only just returned to Bolton after a two-month loan spell with Rotherham United, during which he scored once, but only made one start for the Millers.

Eaves is also now available for struggling Shrewsbury until 5 January.

Town boss Graham Turner has made his double swoop on emergency transfer deadline day in the light of his side's position in League One, just three points clear of the relegation zone.

Both are expected to feature in this Saturday's trip to fellow strugglers Stevenage, with Turner having also allowed young defender Conor Goldson to go out on loan to League Two side Cheltenham Town.

The club are also expecting better news on midfielder Aaron Wildig, who suffered a knee injury in Saturday's 1-0 home win over Notts County, as the result of a heavy challenge from midfielder Andre Boucard.

Wildig is due to undergo a scan on Thursday, but it is understood that the damage, to his posterior ligament, may not be quite a serious as first thought and may only be heavy bruising.

Gayle made his league debut for Town in a 1-0 reverse at Oldham last November - one of only five defeats he suffered in 18 games.

He made his Albion debut this season for the Premier League club earlier this season when he came on as a substitute in their Capital One Cup victory at home to Newport County.

Eaves, signed by Bolton from Oldham Athletic on August 2010, has a career haul of 14 goals from his 55 career appearances (almost half of which come via the bench).