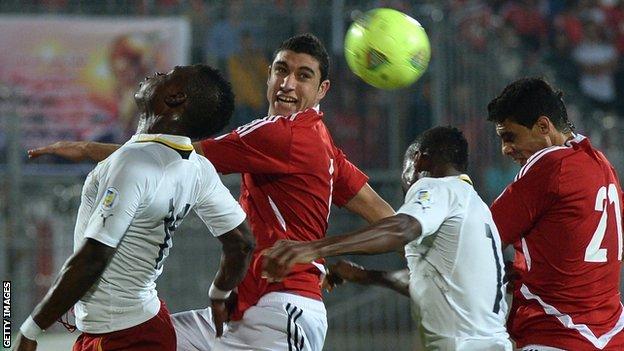 Egypt have moved up more places than any other African side in Fifa's latest world rankings despite losing their 2014 World Cup play-off against Ghana.

The Pharaohs rise to 38th in November's list, up from 51st in October, placing them as the fifth-best team in Africa, up from eighth last month.

Their 2-1 win over Ghana in the second leg of their play-off was not enough to prevent a 7-3 aggregate loss, but did earn them 89.17 ranking points.

Ghana drop one place in the world to 24th after their defeat in Cairo.

Burundi moved up nine places to 112th in the world, while Africa's biggest losers were Chad who slipped eight places to 164th.

The new rankings will not alter the seedings for Africa's representatives in the World Cup draw on 6 December, with Fifa using October's rankings to confirm the top seeds.

It means Algeria, Cameron, Ghana, Ivory Coast and Nigeria will not be among the top seeds for next year's tournament in Brazil.