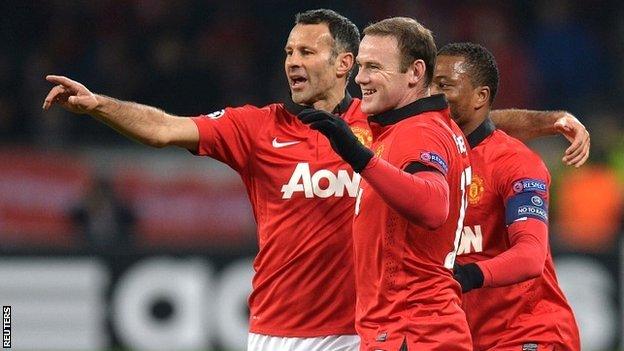 Manchester United boss David Moyes said thrashing Bayer Leverkusen 5-0 in the Champions League was his side's best display since he joined the club.

Moyes took over as manager in July and, after a stuttering start, has overseen United's qualification for the last 16 with a game to spare.

"It's the best we've played in my time here and there's more to come," Moyes said.

"To score five goals, we haven't done that, and to do it away is special."

The scoreline is a record away win for United in the Champions League and extended their unbeaten run to 11 games in all competitions.

"I hope I can continue the standards United have set before and the team's performance tonight has shown that," Moyes said. "It's what I expected, qualifying for the Champions League and doing well in the league and the cups, and I will try to keep that going."

Leverkusen are second in the Bundesliga, four points behind leaders and Champions League holders Bayern Munich, after their best start to a domestic season.

But they had little chance as a clinical United display swept the German team aside, with Wayne Rooney involved in four goals and Ryan Giggs showing his experience in the heart of the midfield.

Rooney set up a first-half goal for Antonio Valencia and forced an own goal from Emir Spahic, before Jonny Evans, Chris Smalling and Nani scored in the second half.

Moyes added: "There were so many good performances. To come to Germany and get a such a good result - they are second in the Bundesliga behind Bayern Munich - gives an idea of where our performance and result was.

"[The performance] was what I was hoping to get more often. There have been signs we are getting better but also signs we have been a bit wasteful at times as well."

The former Everton manager also praised the performance of Giggs, who turns 40 on Friday. and said he enjoyed the combination of Shinji Kagawa playing behind Rooney in attack.

"People are going to question Ryan's age but you can't question him as a footballer," Moyes said. "Everything he did, the way he went about his job, he didn't look fatigued at all.

"Wayne had four assists and Shinji was terrific as well. It's a long season and we have to make sure we have different combinations and they were very good."