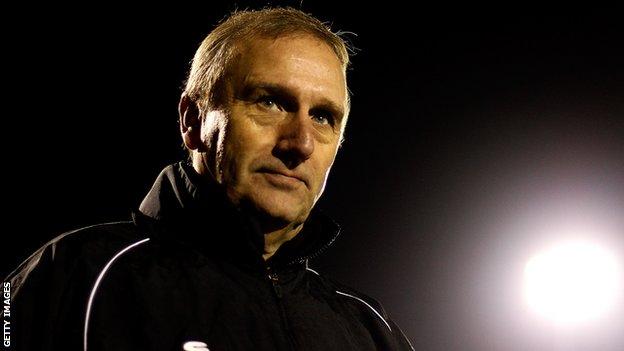 The Darts have lost their last six games in Conference Premier and are currently second-bottom in the table.

"We are all really, really down. No one can hide that fact and it is not a nice place to be," he told BBC Radio Kent.

"At one stage you hit rock bottom and I think we have probably done that. It will be difficult now to get them lifted and out of it but we have got to try as a club."

He added: "We have got to keep our heads up and carry on."

The Kent club's last league victory came on 19 October, when they won 4-3 at home to bottom club Hyde, who are themselves still yet to win a Conference Premier game this season.

Since then Dartford have suffered defeats at the hands of Forest Green, Woking, Macclesfield, Wrexham, Gateshead and Barnet, conceding 15 goals in the process.

Despite their run of one win in 10 games, the Princes Park side are two points behind 20th-placed Tamworth.

"I can fire a load of excuses but it doesn't look good," Burman added.

"Players have got to play with confidence and you have to try and instil that. At the moment it seems like I'm not.

It is not a place I want to be and it is testing me all the time. I am hoping I can stay strong. I accept the responsibility lies with me and I have to get on with it

"It is awkward to criticise, especially when we are down where we are.

"I have not gone mad at them. Footballers do go into a bad place sometimes and you learn a lot more being where we are than at the top.

"We have got to get on with it and it is important the guys stick together and hopefully try and turn this around."

Burman took charge at Dartford in 2005, when the club were still in the Southern League.

Since then they have lifted the Isthmian League Division One and Premier League titles and subsequently won promotion to the top tier of the non-league pyramid via the Conference South play-offs in 2012.

The 55-year-old spent eight years as a player with the club and he is determined to help the club through their current struggles.

"This club has been a major part of my life and to see things happening at the moment is very disappointing," he said.

"It is not a place I want to be and it is testing me all the time. I am hoping I can stay strong, which I am prepared to do as there are a lot of people who have backed me here and there are a lot of things still to be achieved as a club.

"I accept the responsibility lies with me and I have to get on with it."