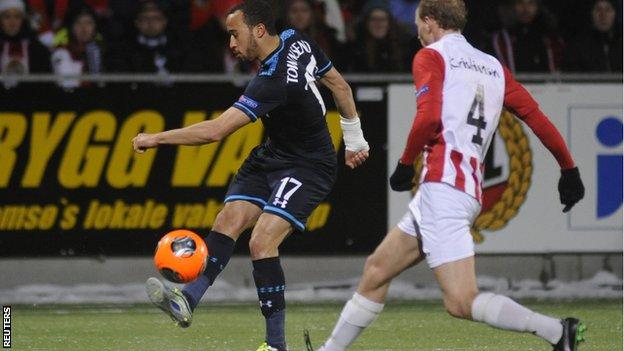 They were guaranteed to finish as group winners after Anzhi Makhachkala drew 1-1 with Sheriff Tiraspol.

Tottenham took the lead in the second half when Vlad Chiriches's shot from Gylfi Sigurdsson's free-kick cannoned in off Tromso's Adnan Causevic.

Mousa Dembele made it 2-0 soon after, slotting in from Sigurdsson's pass.

With qualification already secured and playing on an artificial surface in sub-zero temperatures, Tottenham could be forgiven for lacking the intensity they have shown in previous matches of the competition.

And it was not until after the hour mark that the visitors, without 10 rested first-team players, made the breakthrough against a side bottom of the group and recently relegated from Norway's top tier.

Tromso carried little threat and their one and only clear chance of the match came inside the first minute when Czech forward Zdenek Ondrasek screwed his low shot wide of the Spurs upright.

The Tottenham XI settled into the conditions after 15 minutes, and created three good chances of their own - one of which they should have converted.

All three fell to their midfielders, with England winger Andros Townsend stinging the hands of keeper Benny Lekstrom with a low drive before Frenchman Etienne Capoue saw his strike deflected narrowly wide.

Nacer Chadli then wasted the best opportunity of the half when Sigurdsson stroked a pass into the Belgium winger's path, who then scooped his shot into the snow-covered empty seats behind the goal.

Frustrations continued after the break, with captain Michael Dawson, Capoue and Soldado going into the book for poorly-timed challenges, but the visitors finally made the breakthrough in the 63rd minute.

Sigurdsson, who was arguably Tottenham's man of the match, delivered a precise low free-kick into the path of Chiriches whose effort struck defender Causevic and flew into the net.

And moments later, midfielder Dembele doubled the advantage with his first goal of the season when he coolly finished after a good move involving substitute Lewis Holtby and Sigurdsson.

The goalscorer should have added a second straight from the restart but struck the post with a low shot before slamming the rebound into the side-netting.