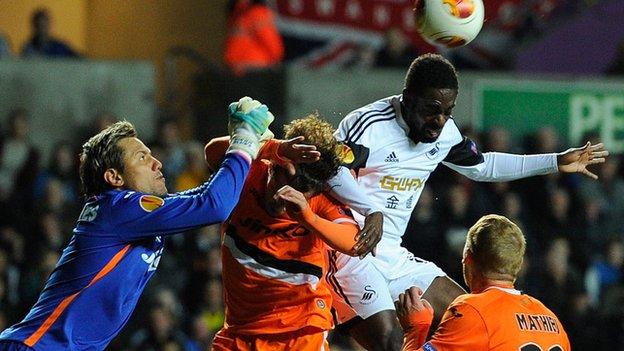 Swansea were made to wait on qualification for the knockout stages of the Europa League after a narrow defeat by Spanish side Valencia.

Alvaro Vasquez came close to clinching a draw for the hosts, but his shot was cleared off the line by Jeremy Mathieu.

The Swans now need a point from their visit to St Gallen on 12 December to be sure of qualification.

But they could still qualify even if they lose in Switzerland, provided Kuban Krasnodar do not beat Valencia in their final game.

A draw would have been good enough to see Swansea into the last 32 after Kuban Krasnodar's 4-0 home win over St Gallen.

However, the defeat means Swansea may yet pay a high price for the two added-time equalisers they conceded against Krasnodar earlier in the tournament.

They also face being without top-scorer Wilfried Bony for several weeks after the striker injured a hamstring just before half-time.

On a chaotic evening at the Liberty the Swans finished the game with 10 men after defender Angel Rangel limped off late in the game with all three substitutes already used.

And they had to play six minutes with 10 men earlier in the half while a blood-free shirt was sought for Jordi Amat after he came off the field with a cut head.

Swansea caused an early scare for Diego Alves in the Valencia goal who looked vulnerable under the high ball, but then fell behind thanks to a an error by their own goalkeeper in the 20th minute.

Tremmel's tame punch fell to Juan Barnat outside the box. His shot was deflected into the path of Parejo who stroked the ball into the bottom corner with Tremmel scrambling.

Swansea were then made to watch Valencia stroking the ball around, dominating possession and dictating the sedate pace of the game.

And the Welsh club's problems appeared to increase when Bony was helped off after pulling up with a hamstring injury.

He was replaced by Vasquez who had the ball in the back of the net just before half-time after goalkeeper Alves had parried Shelvey's shot into the substitute's path.

The goal was ruled out, although TV replays suggested neither Shelvey or Vasquez was offside.

The Swans should have fallen further behind early in the second period when Sofiane Feghouli was put through on goal, but he put his left-foot shot past the post as Tremmel advanced.

Swansea pressed forward and went close through Shelvey and Vasquez, but failed find the vital breakthrough.

Swansea City manager Michael Laudrup said: "Tonight I think Valencia were the better team in the first half and dominated in midfield, not that they created many chances.

"We had a disallowed goal, but Alvaro [Vasquez] was at least one yard onside.

"In the second half we took over and had three or four chances but had one saved on the line and couple of others that very close.

"Maybe we will have to get that last point in Switzerland."