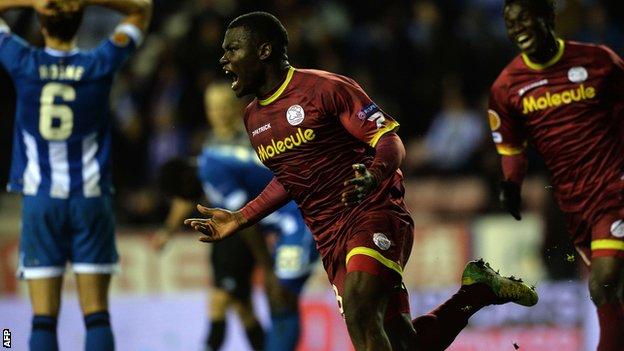 Wigan's hopes of progressing to the knockout stage of the Europa League were dealt a blow as a late Junior Malanda strike gave Belgians Zulte Waregem victory.

A win would have sent Owen Coyle's side into the last 32 - and they were on course for achieving that when Leon Barnett volleyed in an early opener.

And Junior Malanda stunned the home crowd when he fired in a late winner from just outside the area to move Zulte up to second in Group D.

The defeat takes progression out of Wigan's hands; they are third in the standings, two points behind Zulte with one game remaining.

Wigan must beat Maribor away to give themselves any chance of progressing, and hope that Zulte lose their home meeting with Rubin Kazan. If Zulte were to draw and Wigan won, both would be level on eight points but the Belgian side would qualify on their better head-to-head record.

It's been a while

Zulte's win marked the first time a Belgian team has beaten English opposition in the last 10 European games. Standard Liege was the last to record a victory, beating Everton 2-1 in 2008/09 Uefa Cup. It was also the first win by a Belgian side in England since Royal Antwerp beat Aston Villa in October 1975.

It has been a tricky balancing act for Coyle this season as he tries to juggle Championship and European football.

Following relegation from the Premier League, they have made an indifferent start to the domestic season, sitting 11th in the table.

But they were heading for the next phase of the Europa League when Barnett gave them lead in the seventh minute.

Jordi Gomez's skewed shot from Callum McManaman's cross spun into the path of Barnett on the edge of the area and the defender fired a crisp volley through a crowd of players into the net.

The Zulte fans did not let that goal dampen their spirits and continued their vocal support, even as James McArthur and James McClean forced visiting keeper Sammy Bossut into smart saves.

When Zulte had possession they looked tidy, but they struggled to create much and Wigan keeper Nicholls had been little more than a spectator.

Thorgan Hazard has created more chances - 18 - than any other player in the Europa League this season.

A swift Zulte break following a poor clearance by McArthur ended with Hazard shooting and, though it had power, Nicholls should have parried the ball away but only managed to help it over the line.

The second half was a much more balanced affair with both sides looking capable of scoring when they attacked.

Hazard had a shot blocked before sending another effort over while Nick Powell's curling shot was beaten away by Bossut at the other end.

McArthur saw a low shot from outside the area drift inches wide as Wigan increased the pressure in the closing stages.

A draw would have left progression in Wigan's hands but when Malanda was given space by Chris McCann just outside the area, he curled his shot beyond Nicholls to give the visitors victory.