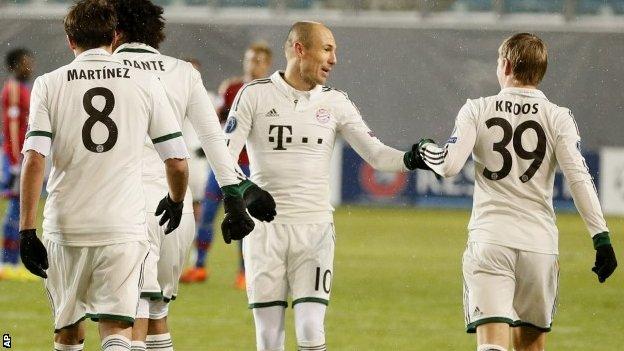 Bayern Munich closed in on top spot in Group D and made it a record-breaking 10 successive Champions League wins with victory at CSKA Moscow.

Arjen Robben gave the German giants the lead when he swept in at the near post, before Mario Gotze danced through the defence to score a fantastic second.

Keisuke Honda, who missed two glorious chances, pulled one back from the spot for CSKA after Dante had handled.

Pep Guardiola's side took just 17 minutes to beat Igor Akinfeev in the CSKA goal. Germany international Muller swept down the left and cut the ball back for Robben, who, on the run, smashed in a first-time shot.

The home side then had three good chances to equalise. The first fell to Nigeria forward Ahmed Musa, who failed to trouble keeper Manuel Neuer with a weak shot.

Honda, whose clever flick led to Musa's chance, then found himself in space and one-on-one with Neuer. However, the Germany number one grabbed the ball as the midfielder was indecisive over what to do. The Japan international had a chance to make amends moments later, but scuffed his shot from six yards out.

The Russian side paid for their profligacy 11 minutes after the break when former Borussia Dortmund midfielder Mario Gotze's waltzed into the area, past three defenders before finding the bottom corner.

CSKA finally managed to reduce the deficit when Honda scored from the spot after French referee Antony Gautier judged Brazil defender Dante to have handled in the Bayern area.

But three minutes later, another lapse cost CSKA. Gotze slammed a superb curling shot against the far post, but as Robben raced on to the loose ball he was brought down by Georgi Schennikov. Gautier awarded a penalty and Muller calmly placed his kick past Akinfeev.

CSKA went close once more when Serb midfielder Zoran Tosic hit the woodwork with a brilliant effort from the edge of the area, but luck was not on the side of Leonid Slutsky's men who will rue wasting a golden opportunity to defeat a strong Bayern side.