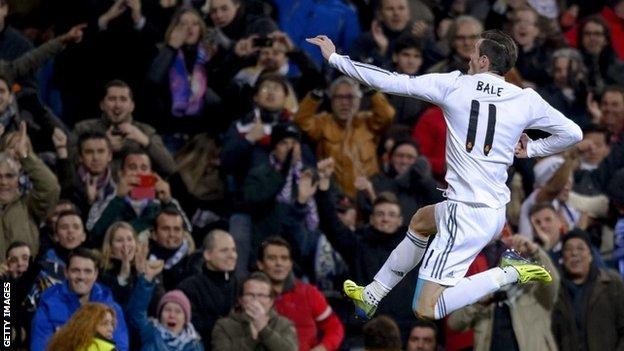 Ten-man Real Madrid ensured their place in the last 16 of the Champions League with a 4-1 win over Galatasaray.

Sergio Ramos was shown a straight red in the 26th minute for tugging back Umut Bulut, but Real bounced back from the setback when Gareth Bale struck in a free-kick from 25 yards.

Bulut equalised from close range before Alvaro Arbeloa made it 2-1 with a low volley and then turned provider for Angel Di Maria to tap-in.

The win moved Carlo Ancelotti's team to 13 points - seven ahead of second-placed Juventus - with one more group game to play.

With leading scorer Cristiano Ronaldo rested, Welshman Bale was the key figure in attack. The £85m world-record signing should have scored in the first 10 minutes when he was clean through, but slotted his shot wide of Eray Iscan's right-hand post.

Real's start to the match then took a turn for the worse when defender Ramos was sent off by Scottish referee William Collum for pulling back Umut.

It was the Spain international's 17th red card of his Real career and his third in the Champions League, with only former Netherlands midfielder Edgar Davids with more in the competition (four).

However, Real made light of the disadvantage when Bale fired in a brilliant free-kick which Eray made a half-hearted effort to try to save.

Bulut equalised a minute later after ex-Chelsea forward Didier Drogba had turned his marker and played an exquisite pass with the outside of his foot for his team-mate in the area.

The scorer then turned provider for the Argentine, who finished low from inside the area for the Spanish giants' third.