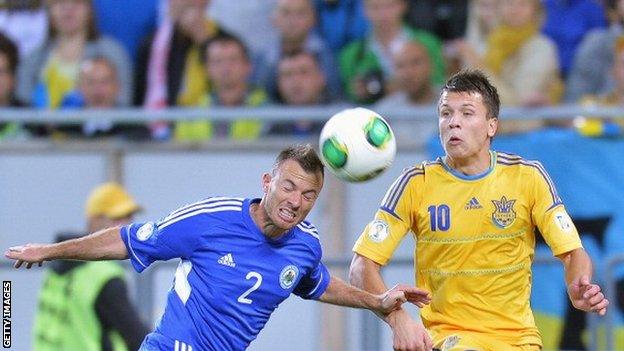 Fifa has rejected Ukraine's appeal against a decision to make them play their first home 2018 World Cup qualifier in an empty stadium.

The Ukrainians were punished following incidents of racist behaviour by supporters in a 2014 World Cup qualifier against San Marino.

World football's governing body also fined the Ukrainians over the behaviour at the Arena Lviv stadium.

A Fifa statement said it supported the original sanctions in its "entirety".

"The next home match for the A representative team of Ukraine in the preliminary competition for the 2018 Fifa World Cup will be played without spectators," read a Fifa statement.

"In addition, the A representative team is banned from playing in the Arena Lviv stadium for the duration of the same competition.

"When rendering the decision, the Fifa appeal committee also recalled the resolution on the fight against racism and discrimination approved at the Fifa congress in May 2013, which advocated the need for stricter application of sanctions."