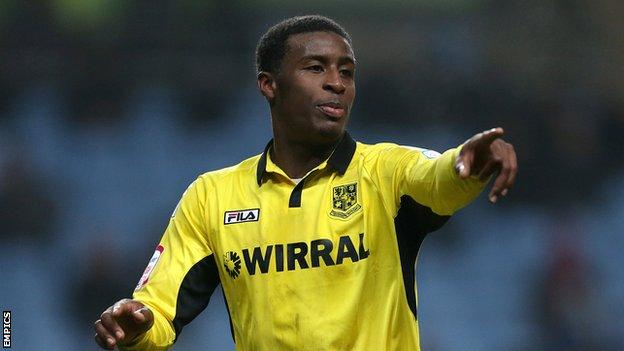 Defender Donervon Daniels was delighted to score on his debut for Gillingham after joining on loan from West Brom.

The 20-year-old volleyed home Craig Fagan's cross to help the Gills to a 3-2 win over Stevenage in League One.

"I am not the typical centre-half," Daniels told BBC Radio Kent. "I have got a bit of technique. It was a beautiful ball and I hit it sweetly.

"It felt amazing. I prayed for it and it came true. The celebration tipped off the importance of that goal."

Daniels moved to Priestfield on a deal until 3 January at the start of this week.

The centre-back has not made a senior appearance for the Baggies but played 14 games during a spell at Tranmere last season.

"My agent knew the fact the gaffer [Peter Taylor] got the job and was in contact with him for a while," he said.

"I was over the moon that I was going to get the opportunity to play first-team football again and get that adrenaline rush that every player desires.

"There is no better feeling than first-team football."

Daniels worked with Gillingham manager Taylor during a summer training camp this summer ahead of the Under-20 World Cup.

"He didn't pick me but I guess I left an impression on him," Daniels said.

I can be hard, strong and tough-tackling when I need to be. But I am a ball-playing centre-back, can pick a pass and am confident on the ball

"I am an honest and hard-working player and he knows what he will get from me.

"I can be hard, strong and tough-tackling when I need to be. But I am a ball-playing centre-back, can pick a pass and am confident on the ball.

"I jumped at the chance to work with him again."

The win over Stevenage lifted Gillingham up to 16th in the League One table.

"The boys worked hard and it wasn't an easy game so it hit home and we appreciated it a bit more," Daniels added.

"I knew it wasn't going to be an easy game and that Stevenage would come with directness and two big front men.

"We stuck to our game-plan and it paid off in the end. The fans were electric and never let us down.

"We have to stay level-headed and grounded and push on on Saturday."