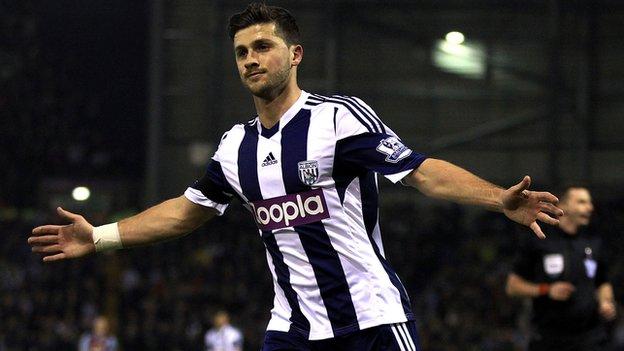 West Bromwich Albion striker Shane Long has admitted that his future is still uncertain as he waits to see what offers come in for him when the transfer window reopens in January.

The 26-year-old Republic of Ireland international came close to signing for Hull City in the summer window and he is still on the radar of other clubs.

"It's a little bit up in the air at the moment," Long told BBC WM.

"But I'm settled here in Birmingham and I love playing for the manager."

It was only Albion boss Steve Clarke's late intervention that prevented Long making the move to Humberside, after he had passed a medical and a £5m fee had been agreed.

"It's football," said Long. "Sometimes things are like that. It was an option that didn't go through in the end. I couldn't really lose either way."

Since then, he had to take a backseat at The Hawthorns before winning his place back following tAlbion's 4-1 defeat by Liverpool at Anfield in October.

He has taken his chance since then, scoring in Albion's 2-2 draw at Chelsea to open his account for the season, then again in his next game for the Republic of Ireland before coming up with two crackers against Aston Villa in Monday night's 2-2 derby thriller.

"I started off OK and then got injured and it's been hard to get back in the team," he said.

"There are a few options for that place up front, Nicolas Anelka, Victor Anichebe, Saido Berahino, Markus Rosenberg, Matej Vydra and myself, with Stephane Sessegnon in behind.

"You know when you get that start, you have to make it count, but I feel in good form at the moment.

"When things are going your way, you just finish automatically, rather than thinking about it."

Although he has scored four goals in four games for club and country, Long has just seven months left on the deal he signed when he arrived for £6.5m from Reading in August 2011.

"I haven't been offered a contract in a while," he added. "I'm just concentrating on trying to score goals and letting the rest take care of itself."