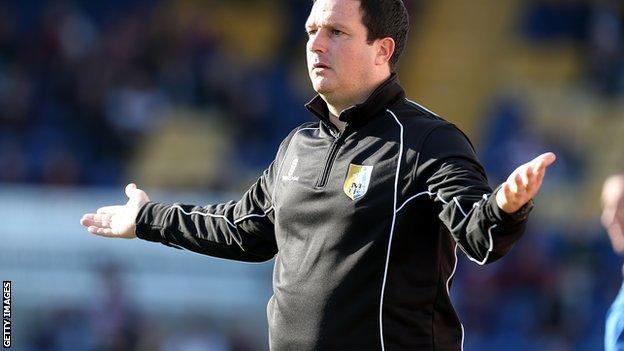 Mansfield Town manager Paul Cox says it is time his players show their true character and put an end to their slide down the League Two table.

The Stags slumped to their fifth successive league defeat at Burton on Tuesday, and are now 17th in the table having sat fourth in October.

"It's times like this that you see the essence of a football club."

Mansfield made a strong start to their first campaign back in the Football League after a five-year absence, losing just two of their opening 13 league games.

But since their victory at Chesterfield to end the Spireites' unbeaten start to the season, the Stags have only managed to record three draws in a nine-game winless run.

Before losing the nine-goal thriller at Fleetwood last week, Mansfield had only scored three goals in their previous six League Two matches.

"Because of the start we had, expectation levels rise," Cox said.

"Things go against you in football, but I'm not letting it get me down. It's up to me to gee the boys up and make sure we put in another performance like that [against Burton].

"It is the second game that they didn't deserve to be on losing side, but saying that it's still two defeats."