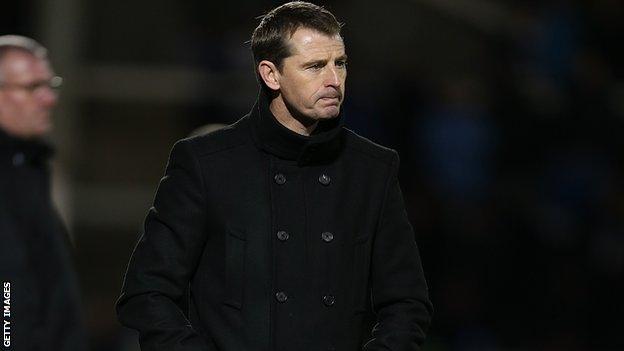 Hartlepool United manager Colin Cooper says his squad must learn when to tweak their style in order to avoid displays similar to the 1-0 loss at Bury.

A Daniel Nardiello goal in a match where Pools mustered only two attempts on goal.

Cooper told BBC Tees: "We need better game management. The players must learn to dip a toe in and work things out.

"If the style in which we usually play is not working, then there has to be another way to get the result."

Hartlepool are currently 13th in League Two, six points outside the play-off positions.

Cooper's men rose up the table after an excellent run which saw them win five out of six matches.

But they have now lost three successive away games and failed to score in any of them.

"We are going to end up playing on pitches that aren't conducive to passing football and in those situations you have to realise what is working," he added.

"Against Bury we didn't have Andy Monkhouse playing and he wins a lot in the air for us, yet we played the same way with little chips forward.

"Equally, I have to look at whether I've have given the right instructions and advice - we're all learning."