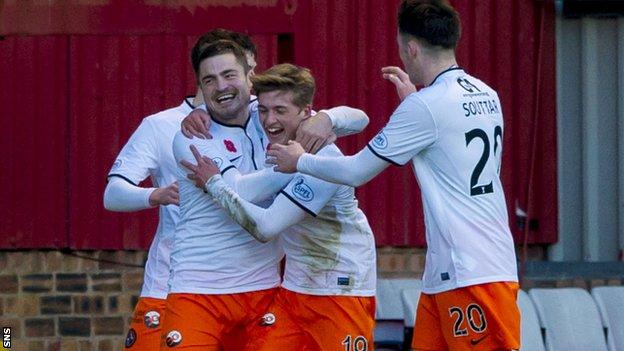 Dundee United duo Ryan Gauld and John Souttar may have signed new deals this month but chairman Stephen Thompson is not ruling out any January sales.

The teenagers have caught the eye this season, along with Andrew Robertson and Stuart Armstrong.

"I'm excited when I watch the team just now but also very much aware we are running a business."

Midfielder Gauld and centre-back Souttar, both 17, recently extended their contracts to May 2016.

Souttar rejected an approach from Sunderland before committing to new terms and Gauld earned rave reviews for his weekend display when he laid on all four goals in the win over Partick Thistle at Tannadice.

Left-back Robertson, 19 was among the scorers, while midfielder Armstrong, 21, and winger Gary Mackay-Steven, 23, were both included in the Scotland squad for this month's 1-0 win in Norway.

Dundee United raised £750,000 in the summer from the sale of Johnny Russell to Derby, while Scott Allan left for West Brom last January and David Goodwillie's switch to Blackburn in August 2011 earned the club £2m.

"No price is put on anybody, I'm not interested in that at all," Thompson told BBC Scotland.

"Ryan signed an extension to his contract just a few weeks ago as did John. They're enjoying their football, they're enjoying playing and with some of the things you see in training they're fantastic to watch.

"Seeing the young players has got the fans going and it's not just one or two at the moment, there are five or six.

"I'm sure at some point they'll move on, but as you know big John turned down a move to go down south and he sees his development here at the moment and playing first team football."