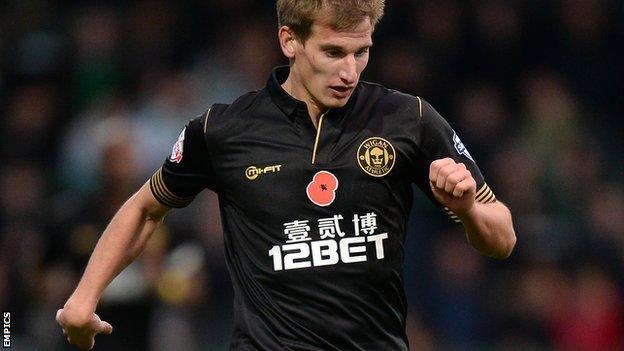 Paul Lambert says that he ended Marc Albrighton's loan spell at Wigan Athletic because he is needed for Aston Villa's busiest period of the season.

The winger, 24, had been expected to stay for a second month at Wigan, but Villa manager Lambert called him back.

"He's done well for Owen Coyle. But we need everybody and I've pulled Marc back because of that," said Lambert.

"The amount of games we're going to have to play in this period is pretty demanding."

But Coyle was disappointed that the loan could not be extended for Albrighton, who has played only once for Villa this season.

"We'd hoped to extend his loan until a minimum of January," the Wigan boss told BBC Sport.

"If he goes back to Aston Villa and plays in the first team, then great.

"If he's left kicking his heels, then I think he'll be as frustrated as the rest of us because he certainly made an impact at Wigan Athletic and would have continued to do so.

"He's been a great lad, I can't speak highly enough of him, so much so that he actually came in and trained even though he was leaving - that's how much he enjoyed being part of the group."