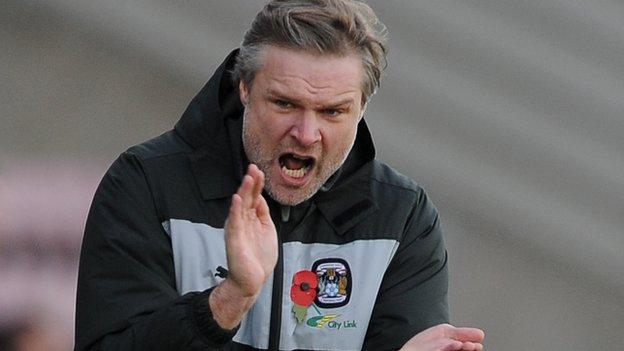 "I might need to bring in a few players to freshen the group up. We have been working hard to try and do that," he told BBC Coventry & Warwickshire.

"We hoped to have a new striker in for Tuesday night.

"And I'm confident we'll have a couple of new players in before Thursday's deadline.

These players have done extremely well thus far, but we need to look at bringing some bodies in to give the squad a boost and give us a hand.

"It looks like the last few games have caught up with them."

Coventry, who started the season with a 10-point penalty, had got back within range of the League One play-off places after winning four times and drawing against Wolves at Molineux during a five-match run.

"Obviously people were talking about promotion during our good run, but it's important to be realistic," added Pressley.

"This is a young side who play on confidence, and we need to remember how far we've come this season.

"When you look at Portsmouth last season, who didn't look like surviving after being deducted 10 points, we've done fantastically well to be in mid-table."