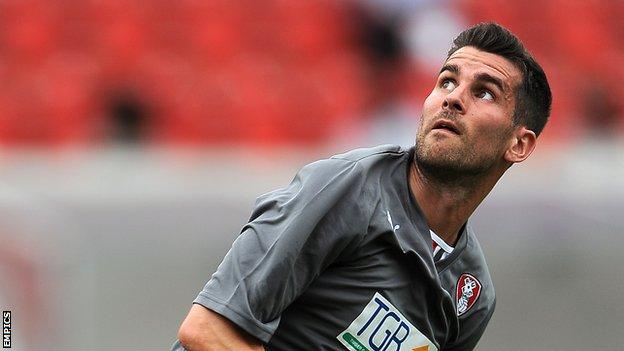 Daniel Nardiello says he is enjoying his time Bury after scoring the first goal of his loan spell from Rotherham.

Nardiello netted in the on Tuesday - Bury's first home success since 31 August.

The 31-year-old striker told BBC Radio Manchester: "It's good to finally get a starting place in the team and get my chance to prove what I can do.

"It's nice when a manager really wants you at the club, appreciates you and gives you that chance to thrive."

Nardiello, who had scored five goals for the Millers this term before his continued: "It's the perfect club for me to be at, where I can enjoy my football and play regularly.

"They've been creating chances but the problem has been scoring goals. Between myself, Danny Hylton and Shaun Harrad, I'm sure we'll get plenty this season."

The former Manchester United trainee has started up front alongside Hylton, another loanee from Rotherham, in each of Bury's last two league matches.

And Shakers manager Ronnie Jepson believes a good partnership can develop between the pair, adding: "Hylton works himself into the ground and Nardiello is always sniffing around for chances. The more stuff we get into the box, the more goals they'll get."