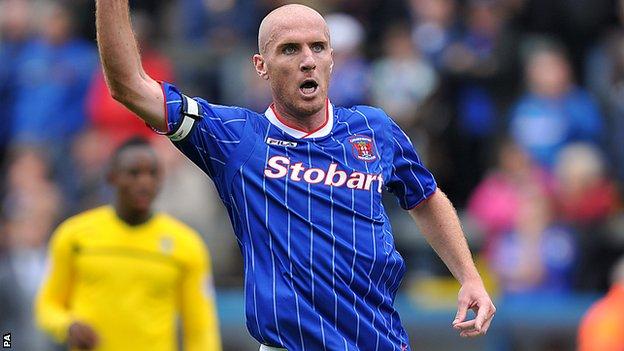 Captain Sean O'Hanlon says Carlisle can play with less pressure after moved them five points clear of the League One relegation zone.

The defender scored as Carlisle ended a five-game winless run, although the goal was credited to David Symington.

In form or out of form?

Carlisle's win over Crewe was a first in five League One matches, their last one coming on 22 October at MK Dons.

But in all competitions, they have now lost just once in seven matches.

O'Hanlon told BBC Radio Cumbria: "No-one seems to have realised I put it in but it's just a relief to have won.

"Now we should be able to play with a little less pressure and look up the table instead of down it."

Carlisle have improved markedly after winning four of their first six league matches.

But they have struggled to maintain that momentum and as a result slipped back towards the drop-zone.

"Winning at Sheffield United [Kavanagh's first game in charge] was massive and we managed to built from there," O'Hanlon explained.

"But recently we have struggled against the teams around us in the league so it was vital to create that gap to the bottom four.

"Hopefully we can move into the top half sooner rather than later which would allow us to relax and play a bit more."