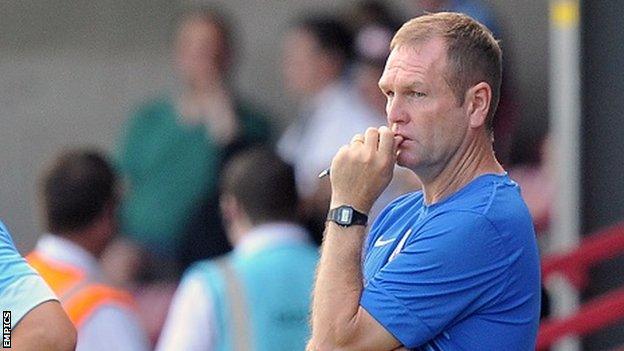 Scunthorpe United have announced that caretaker manager Russ Wilcox will stay in charge until the New Year.

Wilcox, who was Brian Laws's assistant, has overseen two impressive away wins since stepping in when Laws was dismissed last week.

The 49-year-old former defender guided the Iron to a 2-1 win at Portsmouth last Saturday and a 4-0 victory at promotion-chasing Rochdale on Tuesday.

The club said in a statement: "The Iron can confirm Russ Wilcox and Tony Daws will continue as caretaker managers going into the New Year.

"The club are delighted with the response of the players and coaching staff, and hope the good form continues against Torquay United on Saturday and throughout December."

After Tuesday's victory at Spotland, Wilcox told BBC Radio Humberside that he felt the results the side had achieved under him would were sufficient to act as his application for the post.

"Two wins, people are going to talk, and rightly so - a 4-0 win away from home against a team that was joint top," he said.

"I don't think I need to apply, the chairman has seen what he's seen."