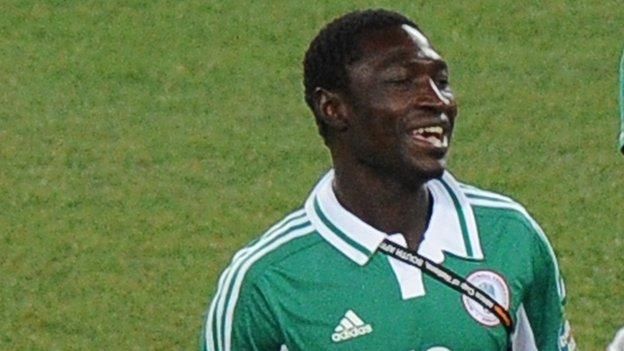 The 23-year-old has yet to play for the Scottish Premiership side's first team since signing from Kano Pillars on a three-year contract in April.

On Monday, he handed in a notice to the club informing them he wants to quit.

"We are waiting to hear back from the club. If all goes accordingly the intention is Gabriel will leave Kilmarnock in January," Reuben's agent, Tony Harris, told BBC Sport.

"But, in the meantime, he is committed to the club and remains fully motivated."

After criticising the club on Twitter last week, Reuben was told by manager Allan Johnston he "must do better" to earn a place in the first team.

Having recovered in August from a three-month spell on the sidelines with a groin injury, Reuben was part of the Nigeria squad that qualified this month for the 2014 World Cup in Brazil.

Reuben knows he has to keep making progress to land a place in his country's squad for the tournament and is desperate for regular football.

He played for Kilmarnock's Under-20s side against St Mirren on Tuesday and scored the only goal of the game before being substituted on 69 minutes.

Gabriel's former Kano Pillars and Nigeria team-mate, Papa Idris, had his contract terminated in June without the defender making an appearance for Kilmarnock.