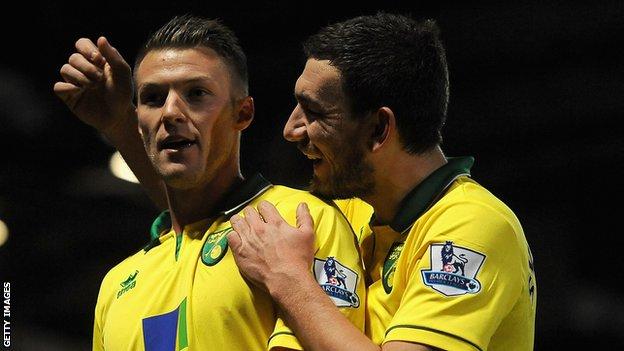 Norwich City will be without wingers Anthony Pilkington and Robert Snodgrass for a number of weeks through injury.

Pilkington, 25, who went off in Saturday's loss to Newcastle United, has a grade two hamstring tear and is expected to be out for up to six weeks.

Scotland international Snodgrass, 26, has a knee problem, but should return earlier than Pilkington.

The Canaries were already without striker Ricky van Wolfswinkel and midfielder Alex Tettey.

"Anthony has had a scan which shows a grade two strain which usually means five or six weeks out," Canaries boss Chris Hughton said at the club's annual general meeting on Tuesday.

"Robert came back from international duty with Scotland and felt his knee at the beginning of training on Friday.

"He travelled with us to Newcastle as we hoped it would settle down, but unfortunately it didn't, and he could be out for a few weeks but not as long as Anthony."

Van Wolfswinkel has a toe injury and is hopeful of returning to face Swansea on 15 December, while Tettey's ankle problem will keep him out until the end of January.

Norwich are currently 16th in the Premier League, having won only one of their last six games.