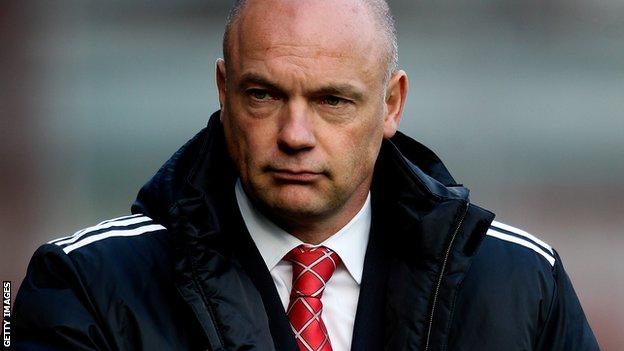 Brentford boss Uwe Rosler says his side are stronger than last season after beating Peterborough 3-2 on Tuesday.

The Bees trailed 2-1 with half an hour to go but late goals from George Saville and Clayton Donaldson sealed their sixth win in seven league games.

Victory kept Rosler's outfit fourth in League One, one place below where they finished last campaign.

"The mental strength is fantastic and I think we are better this year than last year. I see improvement," Rosler said.

He told BBC London 94.9: "How we turned it around was fantastic. All three of the substitutes gave us a big lift.

"That is what it is about being a top team - having people on the bench who not only fill gaps but come on and turn the game in our favour."

Brentford on a roll

Since back-to-back league defeats against Rotherham and Stevenage in October, Brentford have embarked upon a seven-match unbeaten run, winning six of those games.

Last term, Brentford were denied automatic promotion on the last day of the season in a thrilling encounter against Doncaster by a late James Coppinger goal after Marcello Trotta's penalty miss, before losing to Yeovil 2-1 in the play-off final.

Tuesday's match pitted fourth against third in League One, Brentford took the lead in the first half through Gabriel Zakuani's own goal.

However, Posh fought back in the second half at Griffin Park, drawing level through Josh Payne's dipping effort and then going ahead two minutes later when Britt Assombalonga fired past Bees keeper David Button.

But Rosler was pleased how his side reacted after suddenly surrendering their lead.

"The tempo, intensity and sometimes also the quality was Championship level from both teams," the German said.

"In the second half we were too protective of our lead, went too direct and didn't keep the ball. They came at us, pushed us back and turned the game around.

"After we had nothing more to lose we started to play again - the way we did in the first half and the way we normally play.

"They then started to go long and played into our hands."

Brentford's seven-match unbeaten run has lifted them to fourth in the table following a slow start to the season.

But, after drawing at Wolves on Saturday and the victory over Peterborough, Rosler has warned his side to keep their focus against bottom-of-the-table Notts County this weekend.

"We turned it around against a very good side. Peterborough are one of the favourites to go up," he said.

"I am very proud but we have to make it count when we go to Notts County. I think that will be the toughest game of the week.

"I saw some players starting to get tired and we have to really think about team selection.

"Especially when you see the difference the players who came on made."