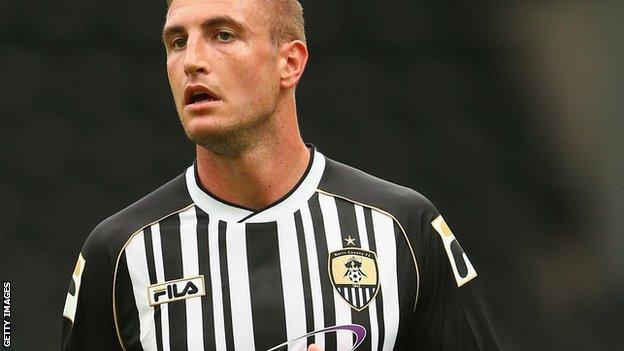 Shaun Derry says captain Gary Liddle was the ideal man to deliver his first point since returning to Notts County as manager.

"If anyone was going to get us a point I'm glad it was Gary," Derry told BBC Radio Nottingham.

Greg is a passionate man, he backs his team, backs his players, backs me and backs himself

"He sets the example every day and it's one that others should follow."

The Notts boss was delighted to finally have something to show for their efforts following encouraging performances in both recent League One losses to Wolves and Shrewsbury.

"It's a great occasion for me," said Derry. "I thought the first points would never come, especially after the way we played the last two games [against Wolves and Shrewsbury]."

Derry feels his side, who remain at the bottom of the table after securing only their second point away from home, learned a lot about how to survive League One relegation.

Despite having Marcus Haber sent off late on and losing his assistant Greg Abbott on the touchline, with the Notts number two set to the stand after an angry outburst, the Magpies hung on.

"We were on the back foot for a large amount and we can gain a lot of confidence from that," added Derry.

"This result enables player to believe in themselves."

Derry also defended Abbott after he took exception to calls for Liddle to be sent off for a late challenge.

"Greg is a passionate man, he backs his team, backs his players, backs me and backs himself," said Derry.

"He felt that the Gary Liddle challenge was more of an innocuous challenge than anything else. And the Bradford bench was quick to try get another player sent off which was disappointing."