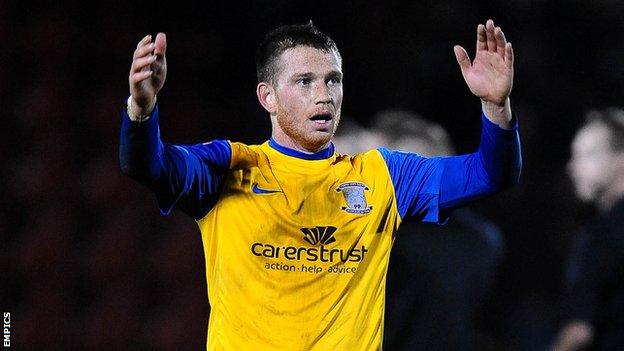 Garner was involved in an altercation with Vale midfielder Anthony Griffith but escaped any action, with Neil Kilkenny mistakenly sent off instead.

The striker went on to score both goals in a 2-0 win, taking his tally to seven from his last five appearances.

"He's playing with unbelievable confidence and it's not just his goals, but his all-round game," said Grayson.

"He is a handful for any defender at this moment in time and he is getting his just rewards."

Garner, 25, initially struggled following his and netted only once in his first 26 games for the League One club.

But his current excellent run in front of goal has helped see North End climb up to third in the table.

Grayson was delighted with a superb team performance at Vale Park, especially having played for 77 minutes with 10 men following Kilkenny's red card.

"I'm not going to do an Arsene Wenger on you," the Preston boss added to BBC Radio Lancashire. "It's a big pitch, you can't see too much anyway and there were bodies in the way.

"The referee's made a decision and we're disappointed because you don't want to go down to 10 men against a good team, but the lads showed so much character, desire and fighting spirit to get a result."