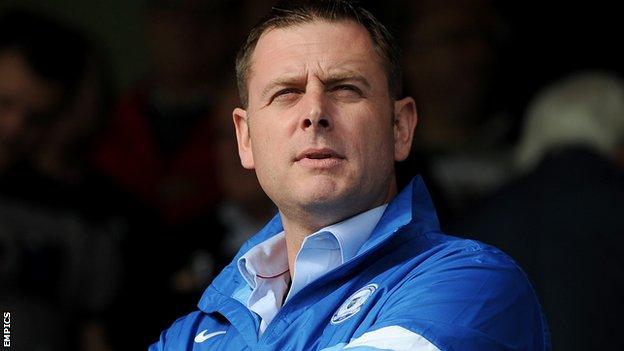 Peterborough United chairman Darragh MacAnthony has said his players are "choking" and are on a "pathetic" run.

on Tuesday and dropped to fifth in the table as their losing streak in League One stretched to five games.

"My patience is thin with this pathetic run we are on," the Irish businessman said on Twitter.

"Our players need to... stop talking a good game, then choking. Go & perform like men!"

Posh were relegated from the Championship on the final day of last season and have laid out their ambition to make an instant return to the second tier.

Their League One campaign started well, with the team taking 31 points from the first 35 available, but a run of six games without a win has seen the London Road side fall 10 points adrift of the top two.

After going 1-0 down against the Bees in midweek, Posh came back to lead 2-1 but conceded twice in the last 10 minutes to suffer defeat.

"Honest opinion after watching my team lose fifth game in a row: played well enough but for calamity clown-like defending from experienced defenders which isn't good enough and against a side you knew would bombard us with crosses," added MacAnthony.

"It's not rocket science to be fair.

"Plus it also doesn't help when you have certain strikers spend their life playing around the halfway line when they should be in the box."

Boss Darren Ferguson has suggested he may look to make loan signings.

"Possibly. But I was encouraged by one or two things I've seen tonight," he told BBC Radio Cambridgeshire.

"I thought young Jermaine Anderson had a great debut and our front two looked a real threat."