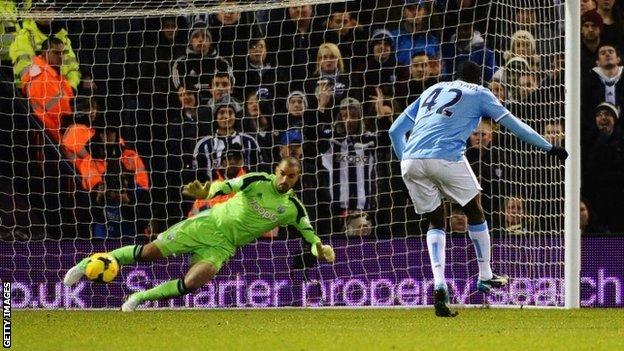 Yaya Toure scored twice as Manchester City saw off West Brom to clinch only their second away Premier League win of the season.

Leicester (a) Capital One Cup, 17 Dec

Toure met Aleksandar Kolarov's cross to make it 2-0 and added a third from the spot after Kolarov was fouled.

City were cruising until the Baggies' first goal, which came in bizarre circumstances after 85 minutes when Kolarov tried to clear but smashed the ball against his own keeper.

More worrying for City boss Manuel Pellegrini was the manner of West Brom's second, which came when Anichebe easily turned past Martin Demichelis and fired home.

Those two late goals took the gloss off what had been a commanding performance by City, and ensured that doubts will remain over their ability to see out results on the road.

City came into the game boasting a perfect home record in the league this season but with question marks over Pellegrini's tactics and team selection on their travels.

Pellegrini's side had already lost four times in six away games, as many defeats as they had suffered in total away from home in their previous campaign.

After beating Manchester United and taking a point off Arsenal and Chelsea in recent weeks, West Brom were expected to give City another test but Steve Clarke's team were on the backfoot from the start.

The Baggies could not live with City's pace and precision passing and had already been carved open twice before Aguero scored after nine minutes, despatching Zabaleta's pull-back into the roof of the net.

City continued to look dangerous on the counter-attack and could have been out of sight before half-time, but they did not press forward with the same urgency after the break.

West Brom were seeing more of the ball but marshalled by captain Vincent Kompany, who was back in the side after missing 10 games with a thigh injury, Pellegrini's side looked in control at the back.

Toure's second goal, which came after Claudio Yacob tripped Kolarov inside the area, seemed to put a seal on a convincing performance with 16 minutes to go.

But the lapses in concentration that have cost City in previous away games struck again before the end, and the scoreline made the game appear far closer than it was reality.

Pantilimon's own goal meant the Baggies were on the scoresheet without managing a shot on target of their own, but Anichebe's fine finish - his first goal for West Brom - ensured they did not end the match with that unwelcome statistic.

West Brom manager Steve Clarke: "We allowed City too much time and space in the first half but in the second half we kept plugging away.

"The scoreline was a fairer reflection on our efforts than 3-0 was. The goals came too late for us, but at least we kept going until the end."

Manchester City boss Manuel Pellegrini: "I think we played really well in the first half and had three or four more clear chances. The second half we controlled the game and made it 3-0.

"In the last few minutes, maybe all of us, including me, were thinking of the next match on Saturday. That is when they scored their two goals."