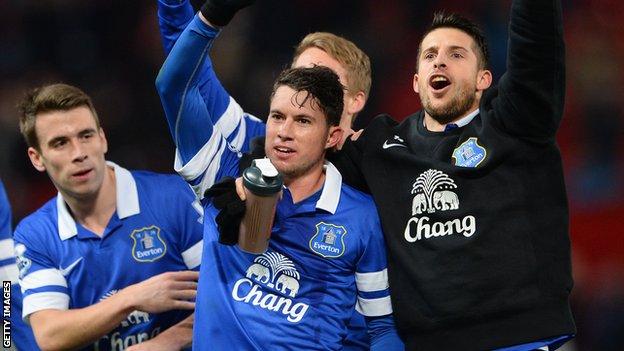 Everton scored a late winner to secure the Toffees' first victory at Manchester United in 21 years - and make it a night of misery for their former manager David Moyes.

Moyes was taunted throughout by the visiting supporters unhappy at the manner of his departure and his subsequent summer transfer pursuit of Marouane Fellaini - whom he signed - and Leighton Baines.

Oviedo was standing in for the injured Baines, who Moyes may again try to capture in January.

Moyes and United were out of luck as both Wayne Rooney and Danny Welbeck hit the woodwork - but nothing should take away the significance of this victory for Martinez and his players.

Martinez was hailed by his exultant supporters at the final whistle as Everton stay fifth in the Premier League table whereas Moyes heard the derision of United's followers with their team now ninth and 12 points adrift of leaders Arsenal.

The hosts were once again without the injured Robin van Persie, but Fellaini was given a start against the club he left for United in a £27.5m deal on deadline day in September.

Everton, as has been their style this season, opened playing incisive passing football and United keeper David De Gea was forced to turn over an early rising shot from Kevin Mirallas.

United, after a hesitant start, worked their way into the game and keeper Tim Howard twice came to Everton's rescue with good blocks from Rooney and Shinji Kagawa.

And as pressure mounted on the Everton goal Ryan Giggs glanced a header just wide from Rafael's cross and Rooney was desperately unlucky to see a shot deflected off the post via Jagielka and Sylvain Distin, allowing Howard to clear with his feet.

It was end to end, however, and De Gea blocked from Romelu Lukaku, whose muscular presence was providing difficulties for United captain Nemanja Vidic.

As the hour mark approached, Moyes decided on a double change with Nani and Adnan Januzaj coming on for Rafael and Kagawa.

Martinez introduced Spanish teenager Gerard Deulofeu for Ross Barkley after 68 minutes and he wasted Everton's best chance seconds later. The youngster's pace took him away from United's defence and on to Lukaku's pass but he shot straight at De Gea's legs.

The biggest escape of the night came at the other end almost immediately as Howard first saved brilliantly from Patrice Evra and Welbeck could only hit the bar with a header on the stretch from the rebound.

In keeping with the ebb and flow of such an entertaining game Everton were back with a response of their own and Mirallas saw his free-kick from just outside the area hit the woodwork with De Gea scrambling.

Rooney's frustration at United's failure to unsettle Everton boiled over and he received a yellow card from referee Martin Atkinson for a reckless kick and shove at Jagielka near the touchline. The striker will be suspended for the visit of Newcastle on Saturday as a result of his fifth booking of the season.

Everton's belief never wavered, even in those anxious moments, and their ambition was rewarded with a goal that will write Oviedo's name into Goodison Park lore.

Lukaku's power was once again to the fore as he rolled away from Fellaini, who should have been booked earlier for a reckless high challenge on McCarthy, and when his cross from the right landed at the feet of Oviedo at the far post he drilled low past De Gea.

United did not trouble Everton again and there were scenes of delight after the final whistle as match-winner Oviedo was hoisted high on the shoulders of defender Distin in front of their celebrating fans.

"I am disappointed to lose, that's the way the game goes sometimes. The game was tight we missed some opportunities to score and Everton took their opportunities.

"We've got a long way to go, we'll need to play some great football and win a lot of games in the run in if we're going to be in there around it come the end of the season."

"I couldn't be prouder. We never felt inferior, we kept doing what we are good at. I have always felt this squad was capable of going anywhere and playing teams eye to eye.

"The second half performance was a lot better. We had real composure in the final third. I thought it showed a real indication of what can be achieved but we have done nothing yet. We need to carry on improving and prove we can perform like that anywhere in the league.

"We have got a fantastic blend of experience and arrogant young players and that excites me."