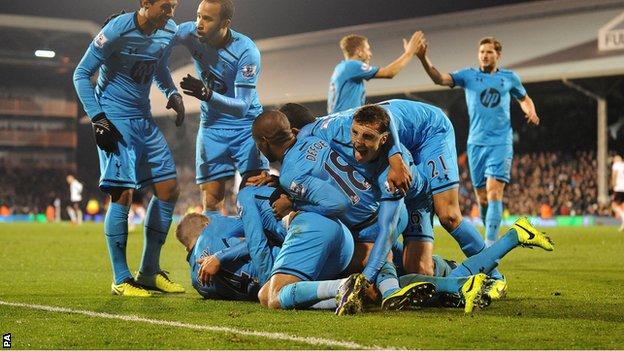 Bryan Ruiz was denied an equaliser by Spurs goalkeeper Hugo Lloris late on.

And the Dutchman's appointment looked to have made an impact as the home side dominated for long stages before being undone by a stirring last 20 minutes from an otherwise disappointing Tottenham.

The visitors came into the game under pressure themselves, having not won in four games and scoring just two goals in that period.

A lot of Spurs' problems this campaign have been in front of goal as, with last season's top scorer Gareth Bale now at Real Madrid, only Sunderland and Crystal Palace had scored fewer in the top flight.

Summer signing Roberto Soldado was the one to pay the price as Jermain Defoe replaced him in attack for just his second Premier League start of the campaign.

The England international almost justified his selection in the opening minutes with a low shot from 12 yards that was well saved by goalkeeper Maarten Stekelenburg after latching on to a loose Fulham pass.

Fulham have had their own goalscoring problems this season, having also only hit the net 11 times prior to the match, and their preparations were not helped by Dimitar Berbatov's agent saying the striker would consider leaving the Cottagers in January.

The Bulgarian, who has scored just once this campaign, returned to the line-up after missing Saturday's defeat by West Ham through illness as one of seven changes made by Meulensteen, with no room in the squad for another former Spurs striker Darren Bent.

Berbatov, who was jeered by sections of Craven Cottage pre-match, went close to scoring with Fulham's first chance of the game, heading straight at Lloris before his first touch let him down when put through on goal by Alex Kacaniklic.

The Cottagers were enjoying the early pressure and Giorgos Karagounis was the next to go close with a low 20-yard drive that was turned wide by Lloris.

The Frenchman, making his 50th Tottenham appearance, then brilliantly tipped a low Berbatov volley wide and, seconds later, Paulinho was left with his head in his hands at the other end after missing the best chance of the early stages.

He had just Stekelenburg to beat, after Defoe's break, but his wild finish flew over the bar with the Fulham goalkeeper already committed.

Tottenham were a long way off their best in the opening half, with passes going astray too often, but were still creating chances with Erik Lamela going close twice in the space of a couple of minutes, first side-footing wide and then having a deflected strike parried wide by Stekelenburg.

The visitors started the second half well but were stunned by Dejagah's opener, laid on by Berbatov, just seconds after the latter had shot into the side netting.

Chiriches's equaliser out of nothing suddenly gave Andre Villas-Boas's men new hope and they were almost ahead soon after with Defoe looping a shot over the bar when clear through on goal.

Holtby's winner came eight minutes from time and despite a late flurry, including Pajtim Kasami hitting the outside of the post, Fulham were unable to secure what would have been a deserved point.

"I thought we were good and well organised. Maybe there was a bit of offside with Defoe's position for the equaliser, but the second goal he [Holtby] struck really well.

"I said to the players I want an inspired performance, that is how we win the fans back, and we did that

"Dimitar Berbatov was phenomenal, the way he led the line was evidence of his quality. No-one knows him better than me because I worked with him for a long time.

"I think we are hard done by with some results but it is up to the players, I refuse to get negative."

"It was very important for us. Us and Fulham were looking to put our challenges back on track and we couldn't wait any longer; it had to happen today and we did it in the most difficult way.

"It was two great goals. After Fulham scored they were crowding the spaces in front of goal and it was difficult to break them down. We scored two cracking goals.

"We want to use this momentum, we have reacted to the Manchester City defeat with two wins already and a draw at home to Manchester United.

"Hopefully now December and January can be the months we put ourselves back on track."