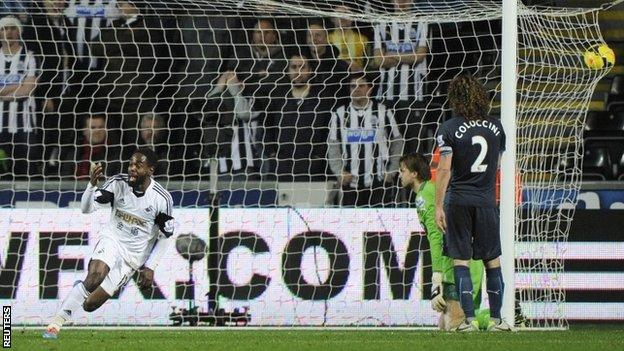 Swansea ended Newcastle's four-game winning streak and recorded their second home win of the season with an impressive display.

The Swans took the lead just before the break when substitute Nathan Dyer volleyed in at the far post.

It was 2-0 when Mathieu Debuchy put the ball into his own net after Tim Krul had saved Jonjo Shelvey's effort.

Shelvey finally earned a well-deserved goal when he curled in a brilliant strike from 25 yards.

The former Liverpool player was outstanding in midfield as Michael Laudrup's side dominated possession against the in-form Magpies.

The victory moves the Welsh club to 11th, while their opponents slip one place down the table having occupied sixth going into the match.

Alan Pardew's men now face a trip to Manchester United, another team who saw their long unbeaten run come to an end on Wednesday.

The visitors made a great start to the match and had created the best chance prior to Dyer's strike.

That opportunity fell to France striker Loic Remy - on a run of eight goals in nine league games - but his header was brilliantly saved low to his left by Michel Vorm.

Swansea, unlike the Magpies, were without their top scorers, Wilfried Bony and Michu, who are still injured.

And Laudrup was left with fewer options when Alvaro Vasquez limped off with what appeared to be a groin injury.

The Spaniard, on loan from Getafe, had earlier gone close with a powerful angled drive that missed the Newcastle upright by no more than a foot. His replacement Dyer fared much better just before half-time.

Alejandro Pozuelo, who was also one of Swansea best performers, delivered a cross from the left that was tipped over by Krul to the corner of the six-yard area. Positioned there was the former Southampton player, who steadied himself before volleying into the Magpies net.

Swansea went close again shortly after the break when the energetic Shelvey launched a low drive that flew just inches wide of the Newcastle post.

They eventually doubled their lead - and the England international was heavily involved.

This time he picked up the ball and raced into the area only to see his shot parried by Krul. However, the ball struck covering defender Debuchy and bounced into the empty net.

A brave headed clearance by Newcastle substitute Massadio Haidara prevented Chico Flores from heading in a third, but the Swans were not to be denied moments later.

And appropriately, the final word went to Shelvey, who capped off a superb night for the Swans fans with a wonderful strike from outside the area that Krul could not keep out.

As for Newcastle, they barely threatened in the second half. However, they will look back at an incident with the scores at 1-0 when Remy's goalbound strike struck Ben Davies' arm - appeals followed, but they were dismissed by referee Howard Webb.

"I'm still waiting for an explanation.

"The ball was going in the net and he [Davies] stuck an arm out. All our players have reacted. From the second they went up and scored. I'm aggrieved about the decisions.

"In all honesty though Swansea played terrific and we weren't good enough to cope at times. In the second half we pushed and when you push you need decisions to got your way - we've had two decisions go against us."