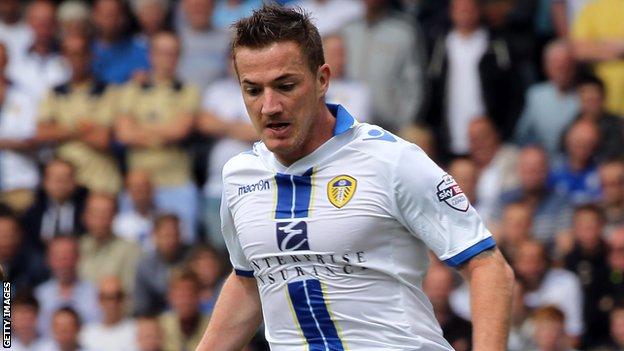 Ross McCormack scored twice as Leeds beat managerless Wigan to move up to seventh in the Championship table.

For Wigan, who parted company with manager Owen Coyle on Monday, it was their fourth successive defeat.

McCormack bundled home his eighth goal in six matches to open the scoring before adding a second with a curling free-kick.

Will Keane had the best chances for Wigan, who were led by caretaker boss Graham Barrow.

The visitors were able to call upon England goalkeeper Scott Carson for the first time since October, after he recovered from an ankle injury and he endured a busy night of action.

He saved well from Luke Murphy before the opening goal came, when McCormack reacted quickest to Jason Pearce's header from a corner.

Keane, on loan from Manchester United, twice went close to equalising but was thwarted by Leeds keeper Paddy Kenny, who first beat him to a ricochet and then brilliantly blocked his point-blank shot.

Matt Smith went close for the home side, shooting straight at Carson, before Leeds' leading scorer McCormack scored his and Leeds second of the night.

He swung over a free-kick from the left and although Pearce reacted quickest and appeared to get the faintest of touches, replays showed the ball evaded everybody before bouncing beyond Carson and the home side comfortably held out for their fifth straight home win.

Leeds have won their last five league games at Elland Road, scoring at least two goals in each game (12 in total).

After the game Wigan confirmed that assistant manager Sandy Stewart has left the club.

Leeds boss Brian McDermott: "We're trying to build a winning mentality. We've played better this season, but we're learning how to win together.

"Paddy made a good save at 1-0 and Ross McCormack obviously, I thought he was terrific, he led the line very well and we were solid.

"They had a lot of the ball in the second half, but I didn't think they really got behind us and two good finishes by Ross, that's it in a nutshell.

Wigan caretaker boss Graham Barrow: "The disappointing thing for me was our lack of finishing power.

"With the people we've got we should be doing better, but I can't fault the lads in how they applied themselves.

"It's been a difficult week as you can imagine, but in training I can't fault the players for effort."