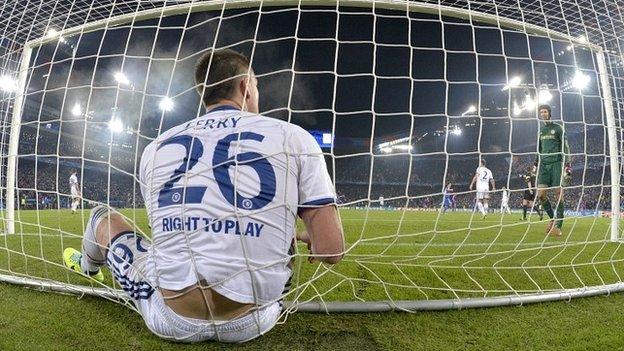 Chelsea boss Jose Mourinho said reaching the Champions League last 16 was the only positive he could draw on after his side's 1-0 defeat by Basel.

Mohamed Salah's late winner came after Samuel Eto'o was carried off with a groin injury in a poor Chelsea display.

The Blues qualified thanks to Schalke's draw with Steaua Bucharest.

"A bad performance, a deserved defeat but because of other results, we qualify. That is the only positive thing from this night," said Mourinho.

"I did not like anything from the first minute. We started with a defensive mistake."

After impressing in Basel's quarter-final first-leg draw with Spurs in last season's Europa league, Basel coach Murat Yakin said of Mohamed Salah: "If Mohamed could score as well, he would not be here any more."

Eto'o was taken off on a stretcher in the first half and requires a scan to determine the full extent of his injury.

"We have to wait about Samuel Eto'o. With these hard pitches because of the weather it is something that can happen," added Mourinho.

Chelsea's qualification for the knockout stages is an improvement on last season's showing when the 2012 winners became the first champions to be knocked out at the first hurdle, although they went on to win the Europa League.

But Mourinho's side will need to be more dynamic after a disappointing performance in Switzerland, where Basel dominated the first half.

The defeat came three days after a resounding 3-0 win at West Ham in the Premier League.

"The team only had a bit of stability and control in the second half. I felt the team was tired. They paid the price of the international break and a crucial match against West Ham," Mourinho added.

"There was no reaction from the players, and wrong decisions. I am not sad with them, as I understand they were not fresh.

"Maybe I should have made more changes, but after playing so well against West Ham, there was the temptation to play the same team.

"We should get a better result than this. But I do not blame the players."

Chelsea will need to beat Steaua Bucharest in their final game to finish as Group E winners. A draw will also confirm top spot if Basel draw with or lose to Schalke in their last game.

The Swiss side, who are now second in the group, only need a point to join Chelsea in the last 16.