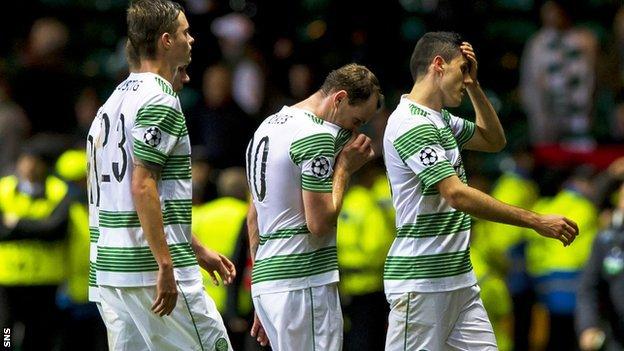 The 3-0 loss to Milan, coupled with Ajax's win over Barcelona, means Celtic will finish last in Group H.

"We've competed again tonight but just that quality at the top end of the pitch has caught up with us," he said.

"Some of the players have covered themselves in glory but it's mainly in the defensive end of the pitch that we're talking about here."

Dutch defender Virgil van Dijk missed the home side's best chance early in the second half when the hosts were 1-0 down.

When our opportunities arose, we snatched at them and that was the difference in the game.

"Tonight has been symptomatic of our campaign," said Lennon. "We've missed good chances.

"The Virgil [van Dijk] chance was a great chance and at 1-1 the game could've gone either way.

"Then we go and concede again from a corner and that's been the most disappointing aspect, as has the opportunities we missed.

"I'm really disappointed with the two goals we've conceded from corners because we take a lot of pride in that. We lost our concentration.

"Big moments in the game changed the course of the game. Milan took their chances when they came along, albeit we were contributors to our own downfall.

"When our opportunities arose - [Beram] Kayal, [Charlie] Mulgrew, Van Dijk, [James] Forrest - we snatched at them and that was the difference in the game."

The gulf between Celtic and Ajax is now four points, so even if Celtic win their final Group H game in Barcelona and Ajax lose in Milan, Lennon's men cannot reach the third-spot that would bring Europa League football.

"We have had a very heavy start to the season and injuries and suspensions do catch up on you," said Lennon.

"When the squad's not as big as some other squads it does tend to bite you.

"Realistically, getting into the Champions league was fantastic for us. When the draw was made we knew how difficult it was going to be."

They travel to Tynecastle on Sunday to play Hearts in the Scottish Cup fourth round.

Lennon added: "We're going well domestically and we've got a big game on Sunday and that's a good one to get our teeth into after tonight.