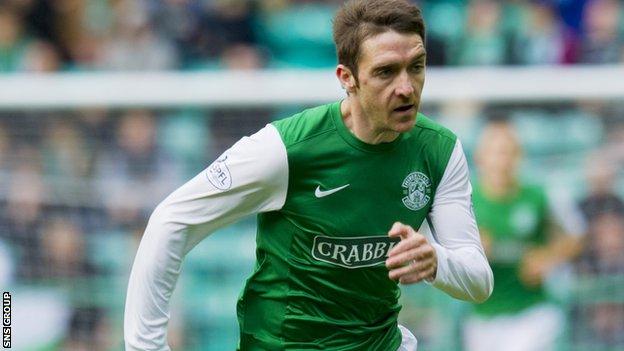 Hibernian manager Terry Butcher expects to be without striker Paul Heffernan for "between three and six weeks".

The 31-year-old limped off with a thigh injury after five minutes during Saturday's 0-0 draw at St Mirren.

"It could be three to six weeks; we're not too sure yet; we're waiting on the results of a scan," Butcher told the Edinburgh club's website.

"It's unlucky for Paul but it gives other people, like James Collins, a chance to get into the team."

Heffernan moved to Easter Road on a free transfer in August and has scored three goals in his 10 appearances.

Butcher also confirmed that Liam Craig would retain the captaincy, having led the side for the new manager's debut in Paisley.

"I like my captain to be in the midfield engine room and he is a player that everyone has a great deal of respect for," explained Butcher.

"I like him and the way he goes about his work."