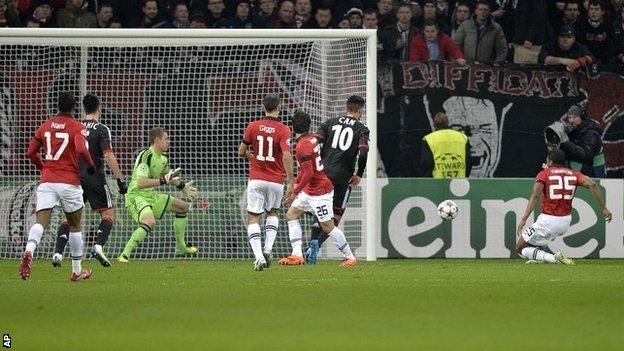 Manchester United reached the Champions League's last 16 with a game to spare after thrashing Bayer Leverkusen.

Wayne Rooney, who had a hand in four goals, chipped to the back post for Antonio Valencia's tap-in for the first before Emir Spahic scored an own goal from the United striker's free-kick.

Stefan Reinartz's header hit the post after deflecting off Ryan Giggs before Jonny Evans turned in from a corner.

Chris Smalling then touched in and Nani rounded the keeper for a fifth.

The result is United's biggest away win in the Champions League and confirmed a miserable night for the German side, who are second in the Bundesliga and lost an unbeaten home record.

Sami Hyypia's team could not cope with the irrepressible Rooney and the evergreen Giggs, who two days short of his 40th birthday showed his class and composure alongside Phil Jones in the centre of midfield.

United's two first-half goals obliterated any momentum the hosts had, and although United were without the injured trio of Robin van Persie, Michael Carrick and Nemanja Vidic, plus the suspended Marouane Fellaini, the visitors were rarely troubled.

The victory meant United boss David Moyes has reached the latter stages of the Champions League at his first attempt with the club and it will give further credence to claims from first-team coach Phil Neville that the players are beginning to believe in his methods.

Last year's Premier League champions extended their unbeaten run to 11 games, and ahead of a tricky run of domestic fixtures against Tottenham, Everton and Newcastle, they can at least relax about their final Champions League match at home to Shakhtar Donetsk.

A point in that game will mean they top Group A.

Leverkusen are only four points behind leaders Bayern Munich in Germany and looked like they were beginning to pose a threat to the heart of United's defence early on.

But the game's course changed after 22 minutes when Evans did superbly to block Stefan Kiessling's shot before United immediately swept down the opposite end to open the scoring after a swift counter attack.

The ball was fed to Giggs and the Welshman found Rooney, who chipped to the back post where Valencia pounced.

It was a hammer blow to the 2002 Champions League runners-up and the home supporters were stunned further when United extended their lead eight minutes later.

Shinji Kagawa, who also impressed and had a hand in the first goal, was brought down by Reinartz on the left wing, and Rooney's perfectly dipping free-kick was headed in by Spahic, under pressure from Smalling.

Leverkusen had an isolated chance around the hour mark when Reinartz's header from a corner hit Giggs and clipped the post.

But after Nani dragged his shot wide and Rooney was also inches off-target after nutmegging Simon Rolfes, Evans touched in after Rooney had drawn a save from Giggs's corner.

With that, the contest was over but after more poor Leverkusen defending, Rooney lobbed to Smalling for a close-range finish and Nani then raced onto Giggs's pass to round Bernd Leno and seal a historic victory.