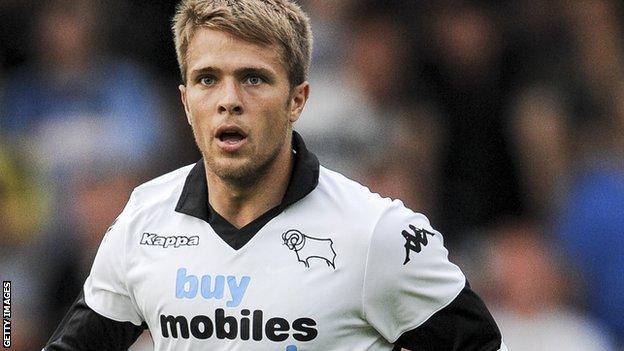 Derby County forward Jamie Ward has undergone scans to determine the extent of his knee injury.

The 27-year-old scored the winner at Bournemouth before hurting himself in a challenge on Charlie Daniels.

"It's more precautionary just to find out what it was. We are hopeful he will be available and it shouldn't be too much to worry about," Simpson said.

Defender Mark O'Brien returned from 10 months out with a knee injury in Tuesday's under-21 friendly against Hull City.

He had an operation on a persistent knee problem in March and only played 11 games last term.

He has had four operations during his short career. A cruciate knee injury forced him to miss the second half of the 2011-12 season and before that he also had ankle surgery in 2010-11 and needed an operation to correct a heart defect in 2009.

"He came in on Sunday and Monday and reported pain there so we had a scan on it and he has been to see a specialist."

Simpson said Ward, who has scored five times in his last seven games for Derby, would be given every chance to prove his fitness for the trip to the DW Stadium.

"Any extra time is a bonus and it [the game being on Sunday] will give him that extra 24 hours," Simpson told BBC Radio Derby.

"At the moment it is still very early and we are planning that Jamie Ward will be available."

Rams striker Johnny Russell, who returned from six weeks out with a fractured leg to replace Ward in the second half at Bournemouth, continued to push for a recall to the starting XI after appearing in an under-21 friendly against Hull City on Tuesday.

Simpson also said defender Mark O'Brien set himself a strong platform to complete his injury comeback after 10 months, playing 45 minutes against the Tigers.

The 21-year-old, who required surgery in March after failing to recover from a persistent knee problem, has not featured since February and played just 11 games this season.

Goalkeeper Adam Legzdins (ankle) and midfielder James Bailey (knee), who are both yet to make a first-team appearance this term, also featured in the friendly.

"It was a good run out for them, going right through the team from Adam in goal, Mark O'Brien got 45 minutes, Jeff [Hendrick] is back after he missed the weekend with the virus, Bailey played his first game and Johnny Russell was back in it again," Simpson said.

"It was good for them all to keep that match practice. They all need a run of games now, whether that is in under-21 or reserve-team fixtures, or introducing them slowly back into the first team with 15 minutes here then 20 and 30 and build it up."