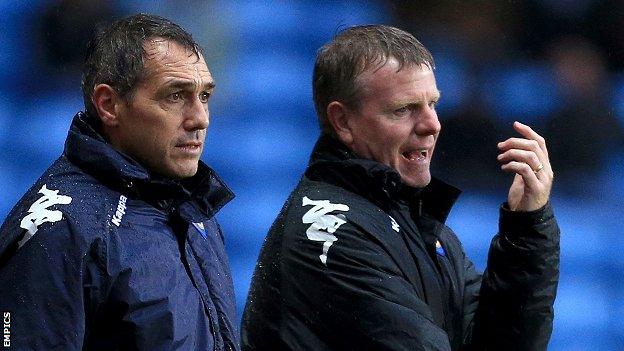 Portsmouth caretaker boss Andy Awford has admitted his surprise at the dismissal of Guy Whittingham.

It'll be a proud moment to lead the team, but not one I wished would come along in these circumstances because I wanted Guy to succeed, I really and truly did

"I felt for Guy, he is a good friend of mine and always will be, and I was a little bit surprised," the 41-year-old told BBC Radio Solent.

"You'd have to ask the board if he deserved more time."

He also played for the club and was appointed manager on a permanent basis last April on a one-year rolling contract following the club's exit from a 14-month spell in administration.

Awford continued: "I haven't discussed the situation in depth with Guy, but I've met him, we've had a brief conversation, and he knows my thoughts.

"You'd have to ask him if he's surprised. But we can't change what's gone before, we can only try to change what happens going forward, starting against Southend. I know the fans will give the team their full backing, as long as the team puts a full shift in."

He added: "It'll be a proud moment to lead the team, but not one I wished would come along in these circumstances because I wanted Guy to succeed, I really and truly did."

Saturday's defeat by Scunthorpe - who are also managerless at present - left Portsmouth 18th in League Two.

And chief executive Mike Catlin promised a "thorough process" in the search for a new manager, but told the club website they hoped to make an appointment as soon as possible.

"The board has set a seven-day deadline for applications for the post of first team manager and will also be approaching, through the appropriate channels, other candidates it feels may have the profile and skills to carry take the club forward," he said.

"The appointment of the new manager is a crucial decision and we want to do everything possible to ensure we make the right choice.

"We have already received a number of enquiries from interested parties and we are also taking soundings from people with wide experience in the game."