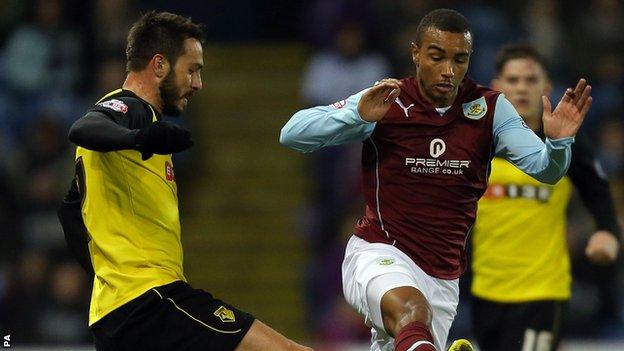 Burnley slipped to third in the Championship table after failing to win for the fifth game in a row, this time against Watford at Turf Moor.

The Hornets are also struggling for form and have now gone seven games without a win.

Burnley, who were without top scorer Danny Ings through injury, had the best of the chances with Scott Arfield and Keith Treacy both going close.

Lewis McGugan had a effort saved deep in injury time for the visitors.

The result leaves Sean Dyche's side just two points behind league leaders Leicester, and QPR, while Watford are in 12th place, 12 points behind the Clarets.

The visitors had goalkeeper Jonathan Bond to thank for keeping them in the game as he saved twice from Arfield, the second a goalbound header, which he did well to tip round the post.

He also had to be alert when Treacy hit a powerful long-range drive that he collected at the second attempt.

The Hornets' best effort came deep in injury time when goalkeeper Tom Heaton parried away an effort from McGugan.

Burnley manager Sean Dyche, who spent 13 months in charge of Watford between June 2011 and July 2012: "I was pleased, but not with the outcome.

"We wanted to win, of course. We're thirsty for wins but the performance was good, particularly in the first half.

"We created enough to get more than a draw, but they are a good side - credit to them - and they have a good manager."

Watford boss Gianfranco Zola added: "I have to be pleased because it was a good performance and the kind of performance we needed to play.