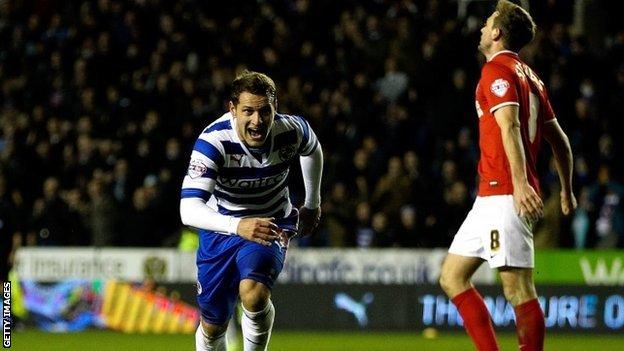 Reading maintained their unbeaten home record in the Championship this season with a narrow win over Charlton.

The Royals went ahead early in the first half when Billy Sharp, making his full debut, drilled home a fine effort past Ben Alnwick.

They had to survive a few anxious moments in the closing stages as the visitors rallied.

But the Addicks could not find a goal and slipped to within two points of the drop zone.

Charlton offered little going forward and could have been further behind in the second half when Alnwick fumbled Pavel Pogrebnyak's 30-yard drive but the keeper recovered in time to block the onrushing Sharp.

Sharp, who signed on loan from Southampton in September, had already put the hosts in front with a crisp shot from 20 yards for his first goal for the club.

And his new side continued to dominate in the second half, almost doubling their lead soon after the restart when Garath McCleary's well-struck 20-yard attempt hit a post and went behind.

Reading lost control of the midfield with 20 minutes to go and were forced to backtrack as Charlton drove forward with purpose.

But they could not make their superiority count with substitute Marvin Sordell having a goal disallowed for offside and Johnnie Jackson and Cameron Stewart wasting efforts.

"It was a great goal from Billy. He was injured with a groin problem when he first got here but he's worked very hard on the training ground.

"He's been on the bench a few times and although he has not played much football, he looked very lively. That's credit to him. Now we've just got to keep him playing football.

"We started brightly but then had to show a lot of defensive resolve near the end. It takes different ways to win a game and, ultimately, we did have to grind it out a bit."

"We were well in it in the last half-hour. We had a real impetus about our play and I just don't know how we didn't take anything away from the game.

"We should definitely have had a penalty in the first half but these big decisions always seem to go against you when you're lower down the league.

"I felt we were a bit flat in the second half and I wanted to change the flow of the game. That's why I made the triple substitution. I think it worked and we can still take a lot out of the display. We just need to keep fighting."