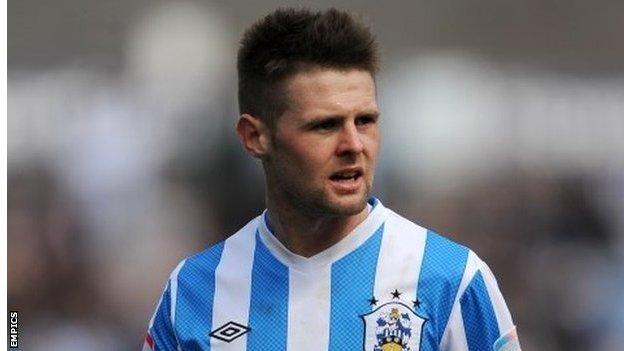 Oliver Norwood's sensational strike guided Huddersfield to a third successive win in the Championship at the expense of Bolton.

The home side's Andre Moritz and Matt Mills were both superbly denied by keeper Alex Smithies in the first half.

Ex-Huddersfield loanee Jermaine Beckford had a great chance to equalise late on but he dragged his shot wide.

Mark Robins's side now find themselves two points off the play-offs in 10th place while Dougie Freedman's team drop to 18th.

Daniel Ward, who joined Huddersfield from Bolton in the summer of 2011, hit the outside of the post while James Vaughan headed agonisingly wide either side of Smithies's quick-fire double save.

The second half produced less goal-mouth action but Norwood added to his goal against Burnley on Saturday in stunning fashion.

Beckford, who missed a late penalty against Middlesbrough at the weekend, failed to hit the target when clean through on goal in the closing minutes.

Bolton manager Dougie Freedman: "I thought we did alright. In another game you get two or three goals and away you go, it's comfortable. I'm probably more disappointed for the players because they gave themselves a good opportunity with the last seven or eight games to really kick on.

"We've got to pick ourselves up come Saturday; the good thing about the Championship is it does come thick and fast and we've got to take our frustrations out on Doncaster on Saturday."

Huddersfield boss Mark Robins added: "Oli is technically outstanding and it's just that belief. We've worked on some of his finishing and shooting, I've spoken with him and he's taken that on board and to some degree he's hitting the ball really well and it's a confidence thing.

"He's a technically gifted player and he deserves that (goal), he's had a good week."