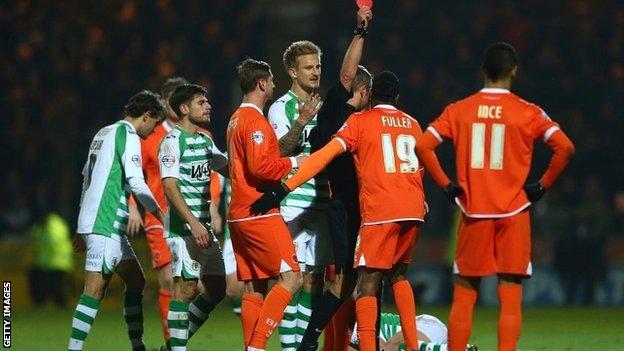 Blackpool had three players sent off as they lost to Yeovil thanks to John Lundstram's home debut goal.

The Everton loanee fired home from close range in the 21st minute to earn Yeovil a second home win of the season.

Blackpool's Tom Ince and Stephen Dobbie were guilty of two bad misses in the first-half.

And the visitors' frustration boiled over in the dying minutes with Kirk Broadfoot, Ricardo Fuller and Gary MacKenzie all seeing red.

First Broadfoot picked up a second yellow card for a foul on substitute Sam Hoskins in the 89th minute before Fuller was dismissed for violent conduct a minute later when he seemed to headbutt Luke Ayling.

Deep into added time they were reduced to eight men when captain MacKenzie joined his two team-mates in the dressing room after his second yellow arrived for a push on Ishmael Miller.

The Glovers' first league victory over the Tangerines could have been more comfortable had Ed Upson's thunderous 30-yard volley not hit the Blackpool crossbar.

But Gary Johnson's side recorded back-to-back victories for the first time at this level while Paul Ince's Blackpool side suffered a league defeat for only the third time this season.

Miller, who scored in Yeovil's shock 3-0 win at Watford, caught the eye early on with the powerful forward firing an effort straight at Blackpool keeper Matt Gilks and five minutes later he was inches away from meeting Joel Grant's teasing cross.

After 17 minutes Ince, who is without a Blackpool goal from open play since mid-September, missed a chance to break the deadlock but he dragged his effort wide after Dan Gosling's through ball sent him clear.

Yeovil then took the lead as Liam Davis' free-kick was chested down inside the penalty area by centre-back Byron Webster and Lundstram squeezed his effort in at the near post.

Sprung into action by the Glovers' opener Paul Ince's men upped the ante and carved out two fantastic chances as Neal Bishop and Dobbie went close.

Miller drew a decent stop from Gilks and was just off-target in the closing stages with a curling effort.

Gosling, too, was wasteful and any chance that Blackpool had of scoring an equaliser was then extinguished by their indiscipline.

"That is another win for us and it is nice now to see four wins on the board and hopefully we can see some more quickly.

"Psychologically to go above Barnsley and Sheffield Wednesday was massive and to beat Blackpool has dragged in probably seven or eight teams.

"Suddenly, you can pull in more teams than you could a few weeks ago and that is good.

"We knew Blackpool compete - that is why they are at the top end of the league.

"They compete and they have that little bit of quality and ability as well. They are all clever players so I am proud of our boys that we competed with them.

"We move on to the next game, which is a massive game against Charlton."