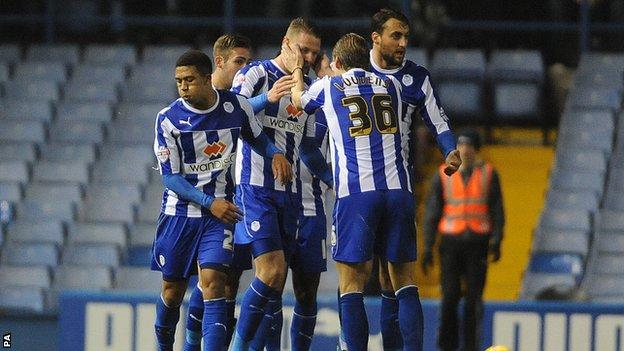 Managerless Sheffield Wednesday pulled off the shock of the night as they beat Championship leaders Leicester City.

Two goals from Connor Wickham gave Wednesday, who sacked Dave Jones on Sunday, their second win of the season.

The home side, led by Stuart Gray, were behind after just three minutes when Anthony Knockaert took advantage of poor defending to open the scoring.

Sheffield Wednesday are the sixth club that Stuart Gray has been caretaker manager of.

He has been in temporary charge of Southampton, Aston Villa, Wolves, Burnley and Portsmouth.

Leicester remain top, despite suffering only their fourth defeat of the season.

And on a night when both Yeovil and Barnsley also won, three points were vital for Wednesday, who remain second bottom.

The main reason for Wednesday's problems this season stem from the fact they are yet to keep a clean sheet in the Championship and this was all too evident in the opening exchanges.

But they responded almost immediately after going a goal behind and Wickham showed the reason why Sunderland paid an initial fee of £8.1m to Ipswich for the striker in June 2011.

He collected the ball just inside the box and hit an unstoppable effort, into the bottom corner.

He had another good chance before he scored his and Wednesday's second of the night, from an almost identical position. This time though he opted for a teasing cross, which crept in at Schmeichel's left-hand post.

Damian Martinez, in the Wednesday goal, made an excellent save from David Nugent to keep his side ahead before the Foxes keeper saved again to stop Wickham from completing his hat-trick.

Sheffield Wednesday caretaker manager Stuart Gray: "We are disappointed for Dave. I am very grateful, honoured and pleased to take charge of the team tonight and that is all it was.

"The chairman has told me there are about 40 applications and I can understand why because it is a fantastic football club with a big fanbase and a huge stadium. You saw there tonight if the players give 100% commitment, the crowd get behind them.

"Any manager that is out of work, and in work, would be interested in this football club."

Leicester manager Nigel Pearson added: "We got off to a good start and didn't back it up. I had to change the formation because of our inability to get back into shape quick enough.

"We conceded two poor goals from our own perspective, but they would probably argue they were two good finishes.

"We should have managed the ball better, but we gave them something to build on, hang on to. Although we enjoyed possession, we didn't really look as dangerous as we should have done."