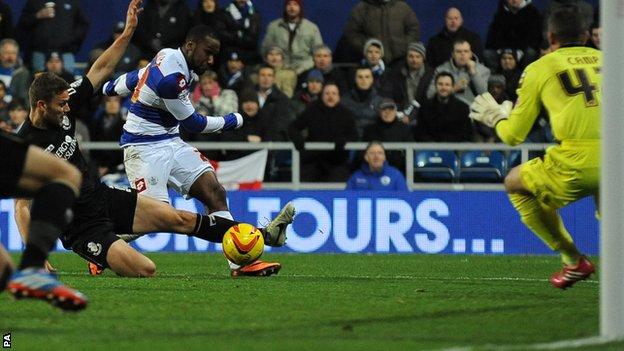 QPR moved level on points with Leicester at the top of the Championship table after a comfortable win at home to Bournemouth.

Charlie Austin opened the scoring when the striker diverted a cross from Andrew Johnson into the net for his fifth goal in five home games.

Junior Hoilett extended the lead shortly after half-time with a deflected shot.

Matt Phillips sealed the win later in the second half with a powerful effort.

Rangers are tied with Leicester on 38 points, and on goal difference, but have scored fewer goals.

Harry Redknapp's side were keen to make amends for their defeat at Doncaster on Saturday, just their second loss of the season so far.

Austin capitalised on good work from Johnson on the left wing for the opener, and had claims for a penalty for handball against Cherries defender Tommy Elphick shortly afterwards rejected.

Elphick appeared to make contact with the ball with his hand as he tangled with Austin on the edge of the box but, following a lengthy delay. referee Andy Woolmer gave QPR a free-kick and did not book the Bournemouth player.

The Cherries' Brett Pitman curled a shot wide just after the restart, but the home side doubled their advantage on 54 minutes when Hoilett's deflected strike beat goalkeeper Lee Camp.

QPR keeper Rob Green made good saves to deny Harry Arter and Ryan Fraser, before substitute Phillips settled matters with a fierce shot that beat Camp at his near post.

QPR manager Harry Redknapp: "We've played three in midfield all year at home and haven't lost. We changed it tonight and we won again so both systems work for us.

"Bournemouth are a really good side so we had to play well tonight and we did.

"It was tough at times. They changed their system, as did we. They had an extra man in midfield which made it interesting but we came out on top which was vitally important for us."

Bournemouth manager Eddie Howe: "It was very much a harsh scoreline. We had some really good opportunities that we could have done better with.

"Bar one header he tipped over earlier in the game, I don't really remember Lee Camp having to do anything.

"To concede three in that type of performance is hugely disappointing."