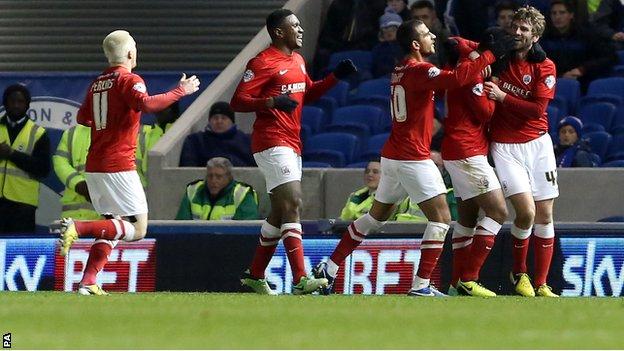 Barnsley remained at the foot of the Championship despite their first away win of the season at Brighton.

The victory came in their first game under caretaker manager Micky Mellon following the sacking of David Flitcroft at the weekend.

A fine individual effort from Paddy McCourt gave the Tykes a first-half lead, which was doubled five minutes after the break by Jacob Mellis.

Matthew Upson's header halved the deficit, but Barnsley held out.

Wins for Yeovil and Sheffield Wednesday meant the Yorkshire club remain at the bottom of the table on goal difference.

The hosts started well, with Barnsley keeper Jack Butland forced into a fine save when he tipped Craig Conway's shot onto the crossbar.

End of Barnsley's away misery

Barnsley were one of only two sides yet to win away from home this season (D1 L7) in the Championship, alongside Sheffield Wednesday, before beating Brighton

But Barnsley ended a sequence of nearly five hours without a goal when McCourt ended a solo run with a one-two with Marcus Tudgay before slotting home.

Tudgay was also involved in the second goal, threading the ball to Mellis inside the area before the midfielder beat keeper Tomasz Kuszczak.

Upson pulled a goal back with a header from a corner, and referee James Linington was forced off with an injury, but Barnsley held out to end a run of six games without a win.

Brighton manager Oscar Garcia: "We only played 55 minutes in this game. But we did get a reaction in the second half and had chances for further goals.

"The problem was we started very slowly. We wanted to start well, but Barnsley kept the ball pretty well, and if we don't have the ball we're not comfortable.

"It's a tough league and there are no easy games, all the players are really disappointed at how we played."

Barnsley caretaker manager Micky Mellon: "I've been friends for life with David (Flitcroft) and I know what it's like to be sacked. It was a tough night last Saturday but it was done very professionally.

"We knew we had to be really professional at Brighton and the key was that I wanted us to keep the ball.

"I was delighted with both the goals and a lot of the time we were in total control. We were determined to pass it and be brave and we achieved that."