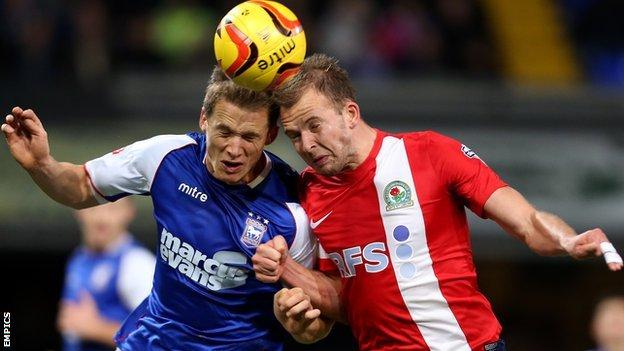 Ipswich rose to eighth in the table as they brushed aside Blackburn to claim their first home win since September.

Luke Hyam put the hosts ahead with a low drive past Jake Kean before Carlos Edwards went close to a second.

Jordan Rhodes exploited poor defending to pull Rovers level against his old club, but Ipswich regained the lead with Edwards poking home from close in.

Rhodes threatened again, but Frank Nouble sealed the win by rounding Kean and rolling the ball into an empty net.

Blackburn had lost only once in their last five games, but were fortunate to be in contention for as long as they were.

Rhodes, who was sold by Town to Huddersfield for just £350,000 four years ago, was the visitors' main threat and chased down Scott's Dann's long punt upfield to cancel out Hyam's opener as the Ipswich defence stood still.

After Edwards had scored following good work from Stephen Hunt, Rhodes almost grabbed a second equaliser, but was was unable to direct Tommy Spurr's teasing cross beyond Dean Gerken.

Blackburn's defeat was confirmed when Kean was slow off his line to gather Tyrone Mings's clearance and Nouble made him pay with a cool finish.

Ipswich manager Mick McCarthy: "We have been trying to get goals from midfield and we got them today.

"Frank Nouble was better in the second half, but that is what he should be doing.

"He is a handful and a frightening prospect when he is bearing down on you."

Blackburn manager Gary Bowyer: "We didn't defend their first goal well enough although I thought we were the better side before half-time and deserved our equaliser.

"But we gave them their second goal and their third and you can't do that. It is not as if we were cut open and they scored breathtaking goals.

"It is frustrating as we have kept five clean sheets at home. We have to find the mentality to do that away from home - and stop being so nice."