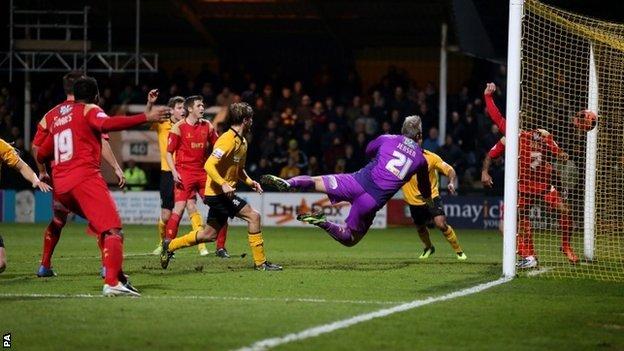 Luke Berry scored both goals as Conference leaders Cambridge booked a place in the second round of the FA Cup with victory over League Two Bury.

The non-leaguers broke the deadlock after Berry swapped passes with Harrison Dunk before keeping his composure to finish past Brian Jensen.

But Berry nodded in the winner to set up a home tie against Sheffield United.

The initial tie was postponed because of a waterlogged pitch, with the rearranged meeting ending in a goalless draw.

The win secures a meeting with Nigel Clough's Blades on Sunday, 8 December.

"I said after the first tie that I couldn't prouder of them, but I'm probably even more proud tonight.

"For a game and an hour, we were absolutely terrific with the ball, and the last 30 minutes was about blood and guts and real desire to make sure we won the game.

"We stopped making the small gains you need to make against a team like that, they scored a goal which rocked us back a little bit.

"I think the best team has gone through. To dominate a team from a league above us for as long as we have done is full credit to the players."

"I'm frustrated. I thought we were going to go 2-1 up on a couple of occasions.

"We hit the post with a header, Craig Jones has had a great chance, and then they go and score from a set-piece at the other end.

"They're decent chances, and then to go and concede one from a set-piece is not very nice.

"If you look at the Football League Show, you'll see how many goals are conceded from set-pieces. We tell the boys how important it is. Sometimes people switch off, and you can't afford that because, like you've seen, you get punished."