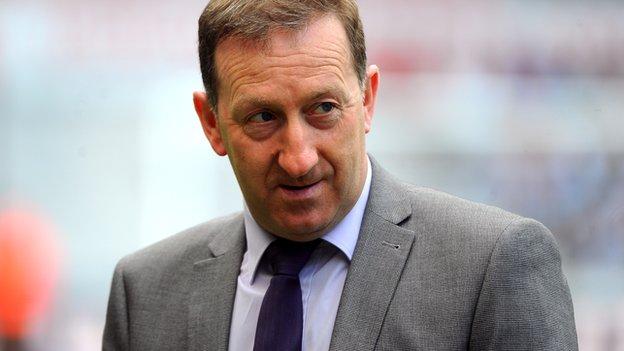 City have a 100% home record in the Premier League this season and have scored 26 goals at the Etihad Stadium.

Manuel Pellegrini's side thrashed Tottenham 6-0 on Sunday to move to within six points of leaders Arsenal.

"Quite rightly you've got to respect Man City but I also view it as a great opportunity for us to go out and show what we can do," he said.

City boss Pellegrini said it was "impossible to play better" following his side's demolition of Tottenham on Sunday.

Swansea, who won 2-1 at Fulham on Saturday, have lost their previous two visits to the Etihad Stadium - a 4-0 defeat in their first Premier League game in August 2011 and a 1-0 loss last season.

But the Swans beat City 1-0 at the Liberty Stadium during the 2011-12 season and held the then champions to a goalless draw last season.

And Jenkins says Swansea are more than capable of getting a result against the fourth-placed side.

"You've always got to have the hope that on the day they have an off day and we play well," Jenkins told BBC Radio Wales Sport.

"You've got to make sure that we're all focused and can try and concentrate on what we can do on the day and hope a bit of luck comes your way and you pick up a result.

"Playing against the top sides, the fact that they will come and play us with their normal tactics without any change in preparation, provides a lot of opportunities to pick valuable points during the season."

"I believe clubs like us can pick up points and wins in those games which will take the pressure off many of the so called games you should take wins out of.

"I firmly believe that's the right way to approach them."

Before Sunday's home game against City, Swansea face Valencia in their penultimate Europa League Group A match at the Liberty Stadium.

Winger Wayne Routledge, who missed Saturday's win at Fulham with a calf strain, is likely to be absent again.

But the Swans are hopeful former Valencia winger Pablo Hernandez will be able to return to face his former club following hamstring trouble.