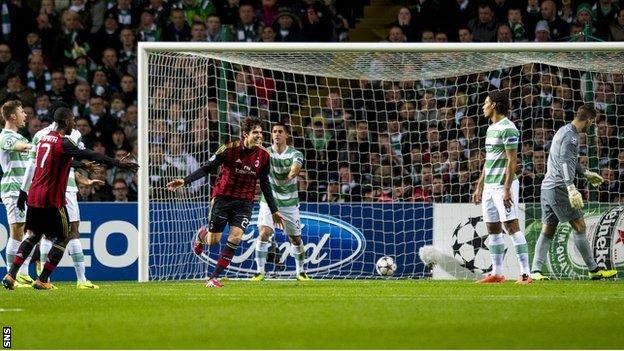 Celtic crashed out of the Champions League and indeed European competition altogether courtesy of a systematic dismantling by Milan.

The Italians were just too clinical for their hosts, though they were aided by some dreadful defending.

Kaka headed the only goal of a largely even and entertaining first half.

But Milan took charge after the break as Cristian Zapata and Mario Balotelli added further goals to end Celtic's hopes of another crack at the last 16.

It leaves them firmly rooted to the bottom of Group H, with just three points and a solitary win at home to Ajax.

Barcelona's defeat by Ajax in Amsterdam also puts the Dutch side out of reach in third place, meaning Celtic do not even have the solace of Europa League football.

Prior to this match, Milan were on a run of seven games without victory and languish in 13th place in Serie A.

Celtic's phenomenal record at Celtic Park in Europe coupled with Milan's dire form had many expecting a home win, but Neil Lennon's warning that the Italian giants could be a "wounded animal" was proved correct as they ran out comfortable winners.

Their opener was a goal of infuriating simplicity from Celtic's point of view, with the hitherto exemplary Virgil van Dijk guilty of a total loss of concentration.

As Valter Birsa curled in a corner, Van Dijk drifted off Kaka, who was left to head unchallenged past Fraser Forster from six yards out.

The visitors' second also found the Celtic defence wanting, again from a Birsa corner, which was knocked back across goal by Antonio Nocerino and over the line by the lurking Zapata.

A night to forget for the Celtic defence was made even worse when a straight-forward ball over the top from Riccardo Montolivo beat both Van Dijk and Efe Ambrose, allowing Balotelli to slide the ball past Forster.

The timing of the first two goals was particularly galling as each one followed glaring misses by the home side.

Beram Kayal hesitated slightly right in front of goal before slicing wide under pressure from Zapata moments before Kaka headed the Italians in front.

And just before Zapata's tap-in, Van Dijk, presented with a glorious opportunity to make amends for his earlier lapse, volleyed straight at Abbiati from six yards when anywhere else on target would surely have meant an equaliser.

And when Van Dijk finally looked to have restored a bit of pride by heading past Abbiati to reduce the deficit, he was judged offside.

Celtic's only other efforts of any great note came from Charlie Mulgrew, who shot tamely into Abbiati's arms, and James Forrest, who poked the ball just wide of the post with the game already lost.

It was a timid end to a night that had begun so full of promise for Celtic as Milan went some way to restoring their damaged reputation and pride.

For Neil Lennon, it leaves just the league title - already a foregone conclusion - and the Scottish Cup to play for.