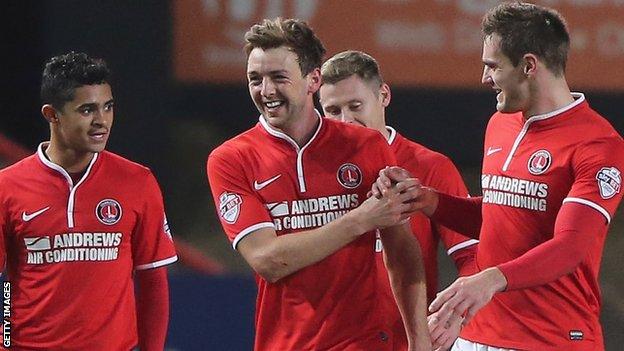 Charlton took full advantage of their second chance against Doncaster as goals from Dale Stephens and Simon Church gave them victory at The Valley.

The original game in August was abandoned at half-time because of heavy rain, with Rovers leading 3-1.

Stephens opened the scoring this time with a spectacular volley before Church slid home to seal the victory.

The Addicks, who climb to 17th, also hit the woodwork twice while Doncaster failed to test home keeper Ben Alnwick.

The win was only Charlton's second at home this season but they dominated throughout despite being forced into a late change.

Goalkeeper Ben Hamer was injured in the warm-up, so Alnwick came in for what turned out to be a quiet debut.

The home side's first chance came after just two minutes when Church should have given them the lead, before Yann Kermorgant scuffed a shot against the post.

Johnnie Jackson then forced Ross Turnbull into a stunning save before the Doncaster keeper was finally beaten by Stephens.

The visitors' only real chance fell to on-loan Manchester United striker Federico Macheda, who blazed a shot over the crossbar.

Turnbull saved well from Lawrie Wilson but could do nothing when Church was sent clean through by Jackson and slid the ball home.

Cameron Stewart went close to adding a third, striking the crossbar with a 25-yard shot.

Doncaster slip to 20th as a result, but are five points clear of the relegation zone.

Charlton manager Chris Powell said: "It was a deserved win, a brave, committed performance under some pressure.

"We knew it was our game in hand and we all knew what happened in the abandoned game - so we needed to make the most of it. We didn't perform in that game but that was a watershed moment, if you pardon the pun."

Doncaster boss Paul Dickov added: "We had six players missing from the abandoned game but take nothing away from Charlton, they looked half a yard sharper than us.

"It grated at the time maybe but I can't let it go now. I'm not going to make excuses, we should have done better than we did.

"We didn't match their desire and Charlton wanted it more than us."